Minister: In the nearest future, 3 thousand new tests to detect  coronavirus will arrive in Armenia. 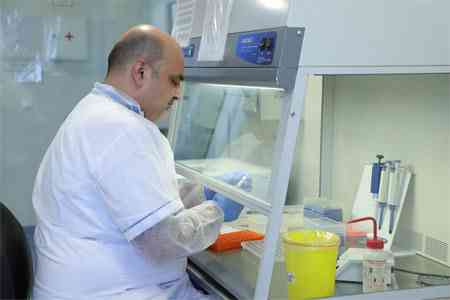 ArmInfo.In the near future, 3 thousand new tests for the detection of coronavirus will arrive in Armenia. The Minister of Health of the Republic of Armenia Arsen  Torosyan stated this at a government meeting on February 27.

According to him, as of today, there are no cases of incidence in  Armenia. The Ministry of Health has already acquired 850 tests, and,  thus, the republic is fully prepared for the possible penetration of  the virus.  Nevertheless, as the Minister stated, everything possible  is being done to exclude such a development of events. Over the past  few days, 65 trucks from Iran crossed the border of Armenia, the  drivers of which were checked. Also, 52 citizens of Armenia were  returned from Iran to their homeland, and none of them revealed a  coronavirus. Since the start of the epidemic, 95 studies have been  carried out in the country, and all of them have given a negative  conclusion. Arsen Torosyan emphasized that the new type of virus is  not much different from the H1N1 strain widespread in the world, and  if you follow the rules of hygiene, including washing your hands more  often, there will be no danger. He stressed that, as a rule, a severe  form of coronavirus is detected in 5% of people who have caught the  virus. The minister recalled that this morning he spoke with his  Georgian counterpart, with whom he discussed a case of morbidity  revealed on the eve of a neighboring country, which arrived in  Georgia from Iran through Azerbaijan. He is isolated for two weeks  and hospitalized. Nevertheless, the sanitary-epidemiological  situation in Georgia is not yet alarming.

In turn, Prime Minister Nikol Pashinyan emphasized that the republic,  despite the epidemic, continues to live its daily life. He noted that  no one will hide this fact from the public when cases of morbidity  are detected. Another thing is that it will take some time to confirm  or refute this possible case. Despite the absence of patients,  nevertheless, the head of government called on the relevant  structures to be vigilant. He expressed hope for an early  stabilization of the situation in Iran, which will allow returning  bilateral relations to the previous level.

According to Deputy Prime Minister Tigran Avinyan, special cards are  compiled for people arriving from risk zones. These persons are under  control of clinics. In general, as the Deputy Prime Minister noted,  the country's healthcare system, the Ministry of Foreign Affairs, and  law enforcement agencies work competently and efficiently during this  period of time, and may even serve as an example for developed  countries.

Deputy Foreign Minister Avet Adonts, in turn, pointed to the data of  the Armenian Embassy in China, according to which the epidemic of the  coronavirus declined.  Note that according to the State Committee for  Hygiene and Health of China, the number of victims of the new  coronavirus COVID-19 in China amounted to 2744 people, more than 32.4  thousand recovered. The number of people infected since the outbreak  of pneumonia exceeded 78.4 thousand.

According to the agency, over the past day in the country 29 fatal  cases were recorded and 433 new cases were detected. At the epicenter  of the spread of infection in Hubei Province, 26 people died in a  single day, in Beijing, Heilongjiang and Henan provinces one at a  time. Since December last year, 2.641 thousand people died of  coronavirus in the province, 65.596 thousand fell ill. As of February  27, 23.2 thousand people were cured and discharged from hospitals. In  total, 43.3 thousand people are currently undergoing treatment in  medical institutions of the country, the condition of more than 8.3  thousand patients is assessed as serious.

The outbreak of coronavirus COVID-2019 was recorded in Chinese Wuhan  at the end of December 2019.  The virus is the causative agent of  severe pneumonia. The infection quickly spread to other countries. At  present, in addition to China, the situation is most acute in Italy,  South Korea, Japan and Iran.