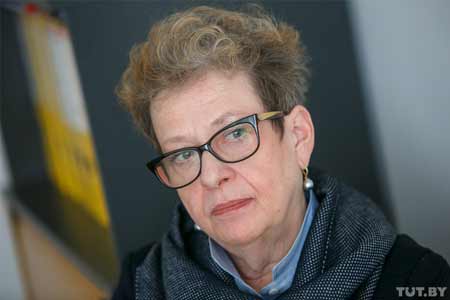 ArmInfo.Head of the EU Delegation to Armenia, Ambassador Andrea Wiktorin,  highly  appreciated the level of cooperation with Armenia on the implementation of the EU-Armenia Comprehensive and Enhanced Partnership Agreement (CEPA).

Speaking today in the Armenian parliament at the hearings during the  implementation of the Agreement, she noted that Armenia, being a  member of the EAEU, on the one hand, and having signed the Agreement  with the EU, on the other, also benefits from its cooperation with  various partners.

According to her, the EU and Armenia worked closely with each other  in the framework of the implementation of CEPA, and the Armenian  government is very responsible for the obligations to implement  reforms in the country within the framework of the roadmap of the  ”greement with the EU. The European Union fully supports this  process, putting emphasis on priority areas for the country. <Our  relationship over the past 2 years has deepened significantly. Both  parties have commitments in political and economic fields, they are  based on universal values and are reflected in the active  participation of Armenia in various programs implemented by EU  structures," the Ambassador emphasized.

She noted that the parties by joint efforts wish to go on to further  strengthen democracy, political stability and institutional stability  in Armenia, to maintain strong peace and stability both at the  regional and international levels. The ”mbassador emphasized the  importance of cooperation in such areas as fundamental freedoms and  security, strengthening the rule of law, justice, and noted the  existence of a common vision in such matters as the implementation of  efforts to increase the efficiency, independence and transparency of  the justice system in Armenia in terms of protecting human rights.

The Ambassador also noted that these reforms will give impetus to  economic transformations and the cause of attracting foreign  investment in the country.  According to her, respect for human  rights and fundamental freedoms are the most important factor for  building strong, independent and transparent institutions in the  country. In this regard, the Ambassador expressed her satisfaction  with the cooperation with Armenia also in terms of implementing  programs to protect the environment, water quality and to implement  large-scale strategic reform in the field of education.

Speaking about the urgent issue in Armenia on the liberalization of  the visa regime with the EU, Andrea Wiktorin emphasized that she was  satisfied with the work of the Armenian government to reach an  agreement on readmission and readiness to conduct a dialogue on this  topic with each of the 27 EU member states to obtain the consent of  each country. She emphasized that reaching an agreement on visa  liberalization with the EU is keeping pace with the implementation of  the CEPA roadmap and expressed hope for progress in this direction.