Yerevan: Starting a dialogue on visa liberalization with the EU  implies only a dialogue 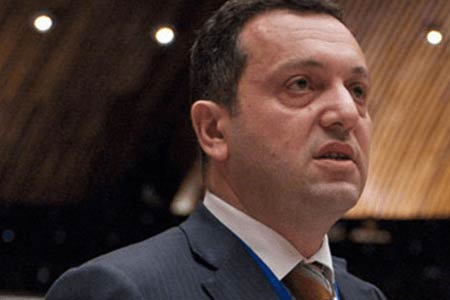 ArmInfo. The deepening of relations with the European Union within the framework of the  Armenia-EU Comprehensive and Enhanced Partnership Agreement (CEPA) is  among the foreign policy priorities of official Yerevan. Deputy head  of the Armenian Foreign Ministry Avet Adonts stated this in the  parliament of the Republic of Armenia at the hearings dedicated to  the Armenia-EU relations.

At the same time, he assured that the high-level political dialogue  with the EU is dynamically, consistently developing and deepening.  "At the same time, the European Union is one of the key trade and  economic partners of Armenia, and interaction is carried out under  the GSP + preferential regime. Along with this, the EU is an  important partner of Armenia in implementing the ambitious agenda of  the reforms of the Armenian government, especially in such key areas  as the judicial system and the police, the fight against corruption,  the protection of human rights, energy, the environment and other  industries to which the EU provides significant assistance, "said the  deputy minister.

At the same time, Adonts stated that relations between Armenia and  the European Union are actively developing both in bilateral and  multilateral formats. In this regard, he recalled that the basis for  the development of the bilateral relations agenda is the CEPA, signed  in 2017, the implementation of 80% of the provisions of which began  back in 2018. According to the Armenian diplomat, this document is a  kind of constitution of relations between Yerevan and Brussels.

"The remaining 20% of the provisions of the document will come into  force after all EU countries have ratified CEPA. To date, the  ratification process has been fully completed in 22 EU countries;  another 5 (Spain, Austria, Greece, Portugal and Italy) are close to  completing the process. Austria should complete the procedures the  other day, "the diplomat said, adding that the Armenian government  attaches importance to increasing the role of civil society in the  implementation of CEPA, which has been repeatedly mentioned.

In this contact, he pointed out the importance of consultations with  the participation of civil society representatives that took place  last year, and as a result, a roadmap for action was developed, and  informed that the second round of these consultations is planned to  begin shortly.

Reporting on close industry cooperation, Adonts emphasized that in  addition to this, active discussions are being held with the EU on  geopolitical issues. "In this regard, I would like to emphasize that  the EU continues to contribute to the efforts of the OSCE Minsk Group  co-chairs aimed at a peaceful settlement of the Nagorno-Karabakh  conflict," the deputy minister said.

He also touched upon one of the most important points of the CEPA -  the beginning of the dialogue on visa liberalization between Armenia  and the European Union, assuring that official Yerevan is taking  consistent steps in this direction and noted that the controversial  subject because of which the dialogue does not start is in the field  of view of European partners. "The Armenian side in this regard  organized study visits to a number of EU countries to clarify the  positions. The Armenian side at these meetings constantly indicates  that the beginning of a dialogue on liberalization implies only a  dialogue, and not immediately simplified entry at the border," he  said, adding that Armenia satisfied all the requirements in the  framework of the implementation of agreements on liberalization of  the visa regime and readmission at the first stage, which was  confirmed by the European side.

Adonts also expressed his conviction that Armenia can become a bridge  between the European Union and the Eurasian Economic Union, and the  Armenian side is promoting this approach on European platforms.