Speakers of Armenia and Moldova`s parliaments: Our states cannot  allow themselves luxury and be dependent on one pole of geo-political  relations 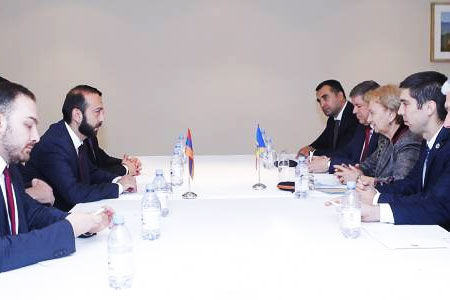 During the private talk with Zinaida Greceanii, welcoming the guest  Ararat Mirzoyan underlined that her visit would give new impetus to  the development of relations between Armenia and Moldova. The NA  President has noted that the relations between the two countries  develop on the basis of mutual understanding and respect, the role of  the parliaments is of great significance in those relations, and the  delegations of Armenia and Moldova effectively cooperate also on the  international different platforms.

The Heads of the parliaments of Armenia and Moldova shared with the  procedure of reforms going on in two countries.

Zinaida Greceanii has told her colleague about the political changes  occurred in Moldova, has given details on the judiciary reforms going  on in Moldova and amendments held in the Constitutional Court (CC),  particularly how the CC former members of Moldova, who have worked  under the pressures of one person, who has usurped the power, have  courage to consider invalid the illegal decisions made by them and  have resigned, and now the newly formed Constitutional Court works  for the benefit of the country, defending the Constitution.

Zinaida Greceanii has noted that after the resignation of the whole  staff of the Constitutional Court of Moldova judiciary serious  reforms are held in Moldova.

The Speaker of Moldovan Parliament has noted that she is impressed by  the road construction works done in Armenia. "We are looking forward  to your Prime Minister's visit to Moldova, the experience that you  have after the revolution, is very important for us. We are also  interested in your experience of bringing investments," Zinaida  Greceanii said. She invited the President of the RA National Assembly  Ararat Mirzoyan, as well as the Friendship Group with Moldova to her  country for more thoroughly discussing the issues of cooperation.

Ararat Mirzoyan has stated that though the development of the events  in Armenia and in Moldova is different, but there are also many  commonalities. The NA President informed that on April 5  Constitutional Referendum would be held on April 5, as the CC members  of Armenia, unlike the ones of Moldova did not voluntarily resign,  though they were given opportunity to make use of the right of  getting untimely pension.

During the meeting in an extended format Ararat Mirzoyan, welcoming  the guests expressed confidence that their visit would promote the  development of bilateral relations and strengthening of further  cooperation.

He has stressed that Armenia is interested in close cooperation with  Moldova in the political, economic, humanitarian and information  technologies spheres. Ararat Mirzoyan has underscored that the two  countries have great potential of bilateral and multilateral  cooperation, 22 documents on cooperation in different spheres is  signed between Armenia and Moldova, and in recent years during  political contacts a number of meetings of high level have been held,  including on the international platforms, particularly in the CIS,  the CSTO, the EEU, the Inter-Parliamentary Union and other  structures.

Ararat Mirzoyan once again emphasized the important significance of  the inter-parliamentary in the context of the two countries'  relations and expressed confidence that the dynamic work of the  Friendship Groups of the parliaments of Armenia and Moldova would be  aimed at new directions of cooperation and achievement of personal  contacts. "We are inclined to actively work in the future as well as  on forming a wide agenda of cooperation. I am sure that the high  level of constructive cooperation will allow us carrying on our  centuries- old partnership between our parliaments and countries,"  the President of the RA National Assembly said.

Thanking her colleague for the invitation Zinaida Greceanii has noted  that she is in Armenia for the first time and is very impressed by  the hospitality and preservation of traditions.

"Your experience after the revolution, the cooperation and your  reforms are really very interesting for us.  Your judiciary reforms  that you make thinking in order the system will not serve to any  political interest are very interesting for us. We have a lot to  learn from each other and we are ready to work in all directions.   Armenia is a friendly country for us, and we shall keep that  friendship," the Head of Moldovan Parliament said.

Ararat Mirzoyan has shared Zinaida Greceanii's opinion, noting that  Armenia and Moldova cannot allow themselves luxury and be dependent  on one pole of geo-political relations. "We cooperate with everybody.   We welcome your readiness sharing with experience," Ararat Mirzoyan  noted.

At the end of the meeting Zinaida Greceanii left a note in the Book  of the NA Honourable Guests and planted a friendship tree in the  Parliament Park.