MFA: The purpose of the visit of Miroslav Lajcak to Yerevan is to  establish a qualitatively new level of Armenian-Slovak relations 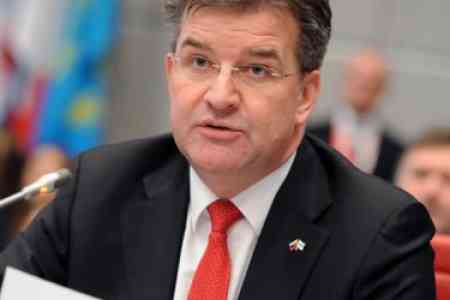 ArmInfo. The purpose of the visit of Slovakian Foreign Minister Miroslav Lajcak to Yerevan is to establish a qualitatively new level of Armenian-Slovak relations.

This is stated in a message from the Ministry of Foreign Affairs of  Armenia on the state of Armenian- Slovak relations on the eve of  Lajcak's visit to Yerevan.

The Armenian Foreign Ministry stated that Armenia and Slovakia  traditionally maintain partnerships, and Slovakia is one of the most  important partners of Armenia in Europe.

"Armenia is interested in deepening and expanding cooperation with  Slovakia in the political, trade, economic, cultural and in all those  sectors that are of mutual interest, both in bilateral and  multilateral formats," the Armenian Foreign Ministry noted, recalling  that the diplomatic relations between two countries were established  in January 1993, and in 2019 Slovakia decided to establish an embassy  in the Republic of Armenia. The embassy will officially open during  the upcoming visit of Lajcak to Yerevan.

The Armenian Foreign Ministry also noted that in December 2019, the  Honorary Consulate of the Republic of Armenia was opened in Slovakia.

The ministry also noted that Slovakia on June 4, 2019 ratified the  Armenia-EU Comprehensive and Enhanced Partnership (CEPA) Agreement,  which is a new legal basis in relations with the European Union and  member countries.

The foreign trade turnover between Armenia and Slovakia in 2019  amounted to $ 8 873.3 thousand. Export of Armenian goods to Slovakia  amounted to - $398.8 thousand, import - $ 8474.5 thousand. In 2019,  1,684 tourists from Slovakia visited Armenia, "the RA MFA noted,  pointing to close inter-parliamentary relations, the presence of  decentralized interaction, and close interaction on international  platforms.

The Armenian Foreign Ministry also informed that Slovakia in 2004  adopted a resolution on the recognition of the Armenian Genocide in  the Ottoman Empire, in addition, it was a co-author of resolutions on  the prevention of genocides in the UN Human Rights Council from 2013,  2015 and 2018.