Constitutional Court Judge: Accuse me for a reason, and not based on  fabricated facts 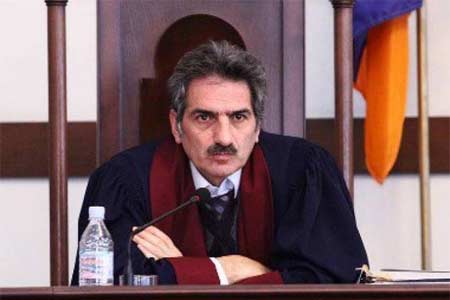 The judge confirmed the information that he met with the speaker of  the parliament Ararat Mirzoyan, emphasizing that the latter is his  former student. "Ararat Mirzoyan and I drank a cup of coffee, but  there was no pressure on me. We discussed some issues and our meeting  was held in a normal friendly environment," said the judge of the  Constitutional Court.

Tokhyan also said that he had met with another judge of the  Constitutional Court Vahe Grigoryan and gave him advice, however, he  did not mentioned details of the talk.

The judge of the Constitutional Court refused to answer questions  related to the upcoming referendum on amendments to the Constitution,  since after the referendum a complaint can be sent to the court and  then he will not be able to participate in the proceedings. Tokhyan  also stated that he was in the Investigative Committee in connection  with the charge against former Deputy Prime Minister Armen Gevorgyan.   In conclusion, the judge called on the media and the public to stop  accusing the Constitutional Court of wrong decisions, recommended  reading the archive of the court, and if evidence is found, publish  it. "The biggest mistake I consider is that we did not work publicly  and did not spread about the decisions made.  Accuse me of the case,  and not on the basis of fabricated facts," said Tokhyan.

According to the decision adopted on February 11 at the meeting of  the CEC, the campaign will be held from February 17 to April 3.