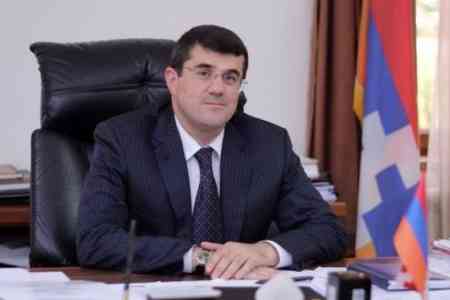 ArmInfo.The leader of the Free Homeland party, former minister of Artsakh Arayik Harutyunyan submitted documents to the CEC for participation in the NKR  presidential election. This was reported by the press service of the  party.

It should be noted that yesterday the speaker of the NKR National  Assembly, the leader of the "Democratic Party of Artsakh" Ashot  Ghoulian also presented his documents to the CEC.

To recall, the documents were also submitted by the candidate from  the Generation of Independence party Ruslan Israelyan, press  secretary of the Artsakh President David Babayan from the  Conservative Party of Artsakh , former secretary of the Karabakh  Security Council Vitaly Balasanyan from the Justice party, Karabakh  Foreign Minister Masis Mayilyan, self-nominated, David Ishkhanyan  from the ARF Dashnaktsutyun party and self-nominated Sergei Amiryan.

It should be noted that on March 31, 2020, presidential and  parliamentary elections will be held in Artsakh.