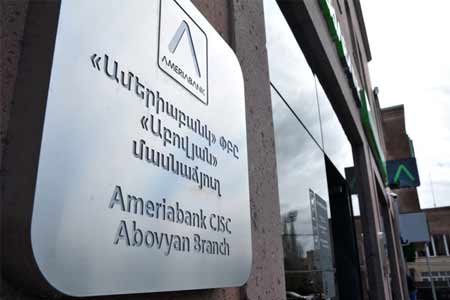 ArmInfo. According to the Global Finance monthly magazine, Ameriabank won the nomination "Best Investment Bank 2020" in Armenia. This award from Global Finance is awarded to Ameriabank for the seventh time, annually in the last five  years, and before that in 2012 and 2013.

According to the Bank's press service, the winners were selected  according to the following important criteria: market share,  opportunities to use banking investment instruments, volume and  number of transactions, quality of service, consulting, structuring  of operations, innovativeness, pricing, initial placements in the  capital market and service opportunities in the secondary market, a  large list of partners in the international market represented by  financial institutions, market reputation, etc.

According to the source, the general list of winners will be  published in the April issue of Global Finance.

The source emphasizes that Ameriabank, attaching importance to the  development of distance banking services, continues to present new  digital solutions and innovative proposals in the financial market of  Armenia.

To note, the Global Finance monthly magazine has been published since  1987. The magazine has over 50,000 subscribers in 180 countries. The  target audience of the publication is the leaders and representatives  of the world's largest private and public financial institutions.  Specialists of the publication analyze the important financial  indicators of more than 192 countries.

To recall, Ameriabank CJSC is a universal bank that provides  investment, corporate and retail banking services in the form of a  comprehensive package of banking solutions. The bank has been  operating in the Armenian market since October 31, 1996. The branch  network of Ameriabank has 19 branches, of which 11 in Yerevan and 8  are regional. The shareholders of Ameriabank as of January 1, 2020  are Ameria Group CY Ltd. - 56.53%, EBRD - 17.78%, Asian Development  Bank (ADB) - 13.96% and ESPS Holding Limited - 11.73%. In March 2016,  the bank began issuing its bonds, the number of issues by February  13, 2020 had already reached 17, of which 13 were dollar in the total  amount of $ 107.710 million (of which 3 have already been paid off),  1 was euro in the amount of 3 million (already repaid) and 3 AMD  issues in the total amount of 8 billion, which were included in the  lists of "Abond" and "Bbond" of the Armenian stock exchange AMX. Of  these issues, 10 USD and 3 AMD issues are quoted today. Along with  this, Ameriabank in June 2016 through its investment manager  represented by responsAbility Investments AG successfully placed $ 20  million debt securities in four Luxembourg investment funds,  subsequently directing the proceeds from this loan to SME lending and  financing energy efficiency and renewable energy projects.  Distinctive awards are: from Euromoney (2016-2019, 2014, 2011-2012),  from Global Finance (2015-2019, 2012-2013), from The Banker / FT  (2019, 2015-2017, 2013, 2010), from Commerzbank- since 2008, annually  awarded the "STP-Award". Ameriabank is the only financial institution  in Armenia that has a S&P credit rating (B +, with a stable outlook).