Nikol Pashinyan: President of Azerbaijan gave the most vivid  assessment of the work of the Armenian parliament 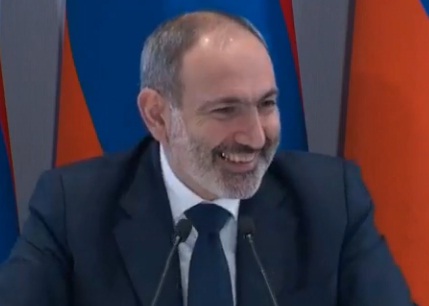 ArmInfo. Our meetings with representatives of the My Step parliamentary faction are always open. Armenian Prime Minister Nikol Pashinyan announced this at a press  conference answering the question whether it is possible that  parliament is dissolved in the near future, and early elections to  the legislative body are held.

He noted that his political team consists of free people, and in some  cases the parties express mutual discontent with each other. "There  are times that the government is dissatisfied with the work of  parliament, sometimes they are dissatisfied with members of the  government. This is not a problem, it should be so," the prime  minister emphasized.

Pashinyan noted that he was always self-critical and sometimes  dissatisfied with his work, and, therefore, the probability that he  will be completely satisfied with the work of other people is almost  ruled out. "At my last meeting with the My Step bloc, I noted that  the president of Azerbaijan gave the most vivid assessment of the  work of the Armenian parliament. He dismissed the parliament in his  country, thus accepting the fact that their country's parliament does  not meet modern requirements. Azerbaijani President set the task for  young people to enter the new parliament, whose educational  qualifications will be higher, who will be more sociable in  international structures. What do you think, why did he go to such  changes?  He had before him an example of work of the parliament of  Armenia, and in particular, the ruling bloc.  Against this  background, the international image of Armenia has also risen. This  is a real assessment, " the prime minister emphasized.

The Prime Minister emphasized that the current composition of the  Armenian parliament, as well as its work cannot be compared with the  work of the National Assembly of previous convocations. "With regard  to the possibility of early parliamentary elections, as you know, the  Constitution sets out the basic provisions in which case they can  take place. This cannot be done on someone's whim. We are a  democratic country. I think that we will have the next parliamentary  elections. But, I will not say anything, if there is a need for this,  they will be held, but this is unlikely, "Pashinyan emphasized.

The prime minister said that there can not be a super-prime system of  government in the country when the people of the country make all  decisions themselves. "Do you know how my suit differs from that of  Serzh Sargsyan? There are never millions of dollars in the pockets of  my suit. Now there are no posts for sale, people are not intimidated.  There are no various media in my pocket, they remain" in the pockets  of the "former government" - concluded the prime minister.