David Tonoyan: Preserving the memory of the Second World War, we at  the state level suppress attempts to spread nationalism, fascism and  xenophobia 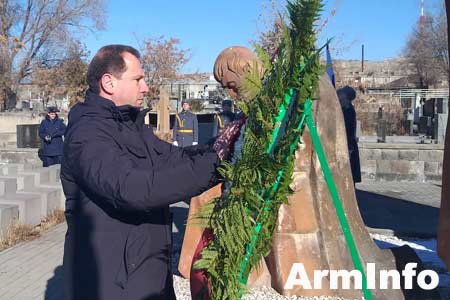 ArmInfo. In the pages of history every nation has events that leave indelible trace on their fate, such is the Great Patriotic War 1941-1945, Armenian Defense  Minister David Tonoyan stated about this on January 25 in Yerevan, at  a ceremony of taking  land from the WWII memorial from the central  city Tokhmakh Cemetery.

At the same time, he stated that the current year is special and  anniversary, which will forever remain in history as the 75th  anniversary of the Great Victory.

"For each of us, this event will remain as a symbol of the victory of  justice, the unlimited pride of the people's memory of millions of  victims. We highly appreciate the personal contribution of the head  of the Russian defense department, Sergei Shoigu, aimed at  perpetuating the memory of the victims of the Second World War  through the implementation of the project" Memory Road "in the  territory of the main Temple of the Armed Forces of the Russian  Federation. Keeping the memory of the Second World War, we at the  state level suppress attempts to spread nationalism, fascism, racism,  chauvinism, extremism and xenophobia, "Tonoyan noted, expressing  confidence that this event will be another link in the further  consolidation of the international community to preserve the  historical memory of the Second World War, will increase the  spiritual and moral upbringing of the younger generation, will  provide the inextricable link between generations and acceptability  traditions.

In turn, the Russian Ambassador to Armenia Sergey Kopyrkin noted that  an important task is being accomplished today, a ceremony is being  taken to take the land from the burial of Soviet soldiers as part of  the military-patriotic campaign "Memory Road". He noted that the  seized land will be delivered with honors to the Moscow Region and  laid in artillery shells, which will be installed on the territory of  the main Temple of the Russian Defense Ministry. "This action, of  course, is dedicated to the anniversary that we will celebrate this  year - the 75th anniversary of the Victory in the Great Patriotic  War. The grave events of the Great Patriotic War left indelible marks  in the life of almost every Soviet family. In defense of our common  homeland in those severe years, the multinational population of all  15 Soviet republics has risen.  Among them, of course, is Armenia,  which has made a huge contribution to our common victory, "the  Russian diplomat noted.

He also stated that 520 soldiers who had died for victory and peace  for future generations were buried at the memorial in Tokhmakh. The  ambassador emphasized that the feat of Soviet soldiers is an example  of heroism and courage, the feat of the rear workers is an example of  unbending will and selflessness, and the memory of this feat is  sacred.

"The memory of this feat is important not only as a factor of  justice, but also that will help us prevent the recurrence of tragic  mistakes, really assess the threats that confront us and learn from  the past," Kopyrkin concluded.