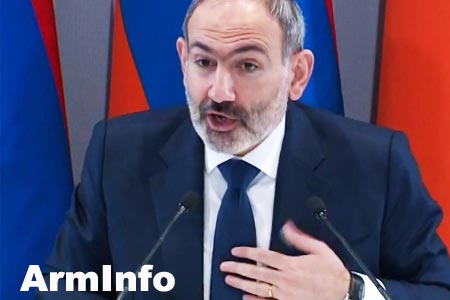 ArmInfo. Key statements made by Armenia’s Prime Minister Nikol Pashinyan at the press conference in Syunik

The Armenian government closed the issue of returning debt for VAT to business entities. This was announced on January 25 at a press conference in Kapan by the Prime Minister of the Republic of Armenia Nikol Pashinyan, who introduced the “101 steps” in the new Armenia.

According to the Prime Minister in 2018-2019 in absolute figures, tax revenues to the state budget amounted to 505.4 billion drams. Some of these funds were used to pay debts, another part - to replenish the revenue of the state budget. As of January 1, 2018, the state owed 275.9 billion drams, and as of January 1, 2020, the amount of  debt decreased to 76.6 billion drams. Thus, as the head of government noted, about 200 billion drams were returned. In percentage terms compared with 2017, over the past two years, the revenue of the state budget has increased by 43.6%. The Prime Minister recalled that 56 billion drams have already been allocated to pay off the remaining part of the debt, 40 billion of which are paid quarterly, as required by the legislation of the country.

Chairman of the State Revenue Committee (SRC) of  Armenia David Ananyan explained then:"We all know  that there are debit balances or so-called "overpayments" in the area  of value added tax (VAT). After the new Tax Code entered into force,  the difference between the old and the new debit balance was  established.  The new ones - after July 1, 2018 are returned to  economic entities on the basis of their own statement in quarterly  terms, and the old ones are sent exclusively to pay off upcoming VAT  liabilities. With this decision, we eliminate the distinction between  old and new receivables, which will be applied from the 1st November  2020, "he explained.

Moreover, as the head of the SRC pointed out, the very next day after  the approval of the bill, taxpayers can apply for receiving  overpayments formed at that time. The following scheme will be  applied: for business entities with debts of less than 5 million  drams, VAT debit will be returned only on the basis of applications,  without desk audits, for debts of 5 to 40 million drams, VAT funds  will be returned in a simplified manner, based on the application of  the economic entity and information available to the tax authority,  and in case of exceeding the threshold of 40 million drams, the funds  will be refunded after the documentary study and verification .

According to the head of the tax and customs committee, the matter  concerns about 9 thousand business entities, 3 thousand of which are  old debits, the state owed 56 billion 443 million drams. So,  according to him, after making the decision, persons with a debt of  up to 5 million drams will automatically receive their funds. "By the  end of the year, we will return 50 billion drams from the indicated  56 billion drams," Ananyan said.

The government of Armenia intends to completely eliminate extreme poverty in the country within five years. In 2018, compared with the previous year, it was possible to reduce the poverty level in the country by 2.2%, bringing it to 23.5%, which is the lowest indicator for many past years. At the same time, the level of extreme poverty over the indicated period decreased from 1.2% to 1%. Moreover, as Nikol Pashinyan pointed out, the poverty level was estimated based on the third World Bank methodology, which began to be applied from the beginning of 2019.

One of the main directions of overcoming poverty, according to the Prime Minister, is economic growth and employment. According to preliminary data, for the three quarters of 2019, Armenia registered a GDP growth of 7.5%, which is by 1.6 percentage points higher than for the same period in 2018 and 1.3% in 2017. In terms of economic growth, as the head of government noted, Armenia is a leader not only in the Eurasian Economic Union and the CIS, but, according to the International Monetary Fund, throughout the European area.

Weapons acquired by the Ministry of Defense were either manufactured in 2019 or not previously used. Pashinyan noted that the Ministry of Defense, according to the budget for 2020, was allocated 307 billion drams. “Since 2018, Armenia has acquired an unprecedented amount of ammunition. In particular, such weapons as multifunctional Su-30SM fighters, Tor-M2KM and Osa-AK anti-aircraft missile systems were acquired,” Pashinyan said. The prime minister noted that the armed forces were also replenished with artillery, anti-aircraft guns, small arms, ammunition, etc.

"Various weapons tests were carried out. The Armenian government turned the shameful page of weapons, a sample of the1980s," the Prime Minister concluded. It should be noted that the phrase “Weapons of the 1980s” appeared after the statement of the third President of Armenia Serzh Sargsyan that the Armenian soldiers fought with weapons of the 1980s during the four-day April 2016 war in Karabakh.

The Yerevan Municipality together with the government developed a program for the resettlement of residents of emergency houses and modernization of the housing stock. Armenian Prime Minister Nikol Pashinyan spoke about this at a press conference. He informed that since 2020, due to the savings, the Yerevan Municipality intends to build a multi-storey building, where residents of 2-3 houses will be relocated - living in old five-story buildings with a fifth accident rate. According to the model, these "Khrushchev" buildings will be demolished, and the released land will be provided to developers on the basis of investment applications for the construction of multi-storey buildings, part of the housing stock of which will belong to the mayor's office, which thereby compensates for their costs. According to this chain, the country will begin the process of modernization of the housing stock and the problem of resettlement of residents from emergency housing will be solved. Pashinyan emphasized that the pilot project of the program will show how attractive it will be for investors and the government will try to implement this model in the future so that it would be effective and beneficial to everyone, including investors.

At the same time, Pashinyan said that the government also allocated 1.9 billion drams to provide housing certificates to children - graduates of orphanages. He emphasized that the state made a legal obligation to provide housing for these children back in 2003, but for 17 years it has solved this problem.

The government also allocated 1.5 billion to be provided to 112 refugee families from Azerbaijan to improve their living conditions. He emphasized that the state has done almost nothing in this direction for 10 years.

The Armenian government intends to change the formula for financing the country's cultural objects. According to the head of government, cultural objects, creative teams should learn to accumulate their own income.

This approach, according to the assurances of the head of government, does not mean the state’s refusal to finance the field. Cultural objects should themselves determine the direction of activity for additional income. Their activities will be evaluated by the number of tickets sold, the quality of submissions, development programs.

This year, the state will completely take upon itself the financing of a number of creative groups, spending an additional 700 million drams for these purposes. Among these groups are the State Symphony Orchestra, the National Center for Chamber Music, chamber choir, the National Jazz Orchestra, the National Philharmonic Orchestra and others. Thus, as the Prime Minister emphasized, everything is done to ensure that the leaders of these groups do not bow their heads to the oligarchs, do not speak to the rich in restaurants, do not engage in political activities for the sake of a particular political party, but engage in their direct duties.

But this measure, as the prime minister noted, will be temporary, during which financing mechanisms will be found, among which the prime minister stressed state funding, own incomes of creative groups, deductions of associations of friends of classical music, etc. The head of government also paid attention to the lack of annual programs of creative collectives. And this, as Nikol Pashinyan noted, does not allow operators to include in tour packages offers for tourists to attend concerts.

On New Year's days, Nikol Pashinyan continued, many citizens of the country spent in Georgia, but the goal of the country's government is to have as many tourists from Georgia, the UAE and other countries as possible for the New Year celebrations.

If an oligarch makes payments to the state budget, he ceases to be an oligarch

If the oligarch makes payments to the state budget, he ceases to be an oligarch. A similar view is shared by Prime Minister Nikol Pashinyan.

He noted that earlier oligarchs were guided by the principle "minority power", but now this power does not exist anymore, and never will be. As an example of the exclusion of oligopolies, the head of government pointed to the data of 1000 large taxpayers, from which it follows that in January-September 2019, the country's largest taxpayers paid 764 billion drams to the state budget, which is 90.7 billion or 13% more than in the same period of the previous year. Compared with January-September 2017, the amount of contributions to the state treasury increased by 185.5 billion drams, or 32%.