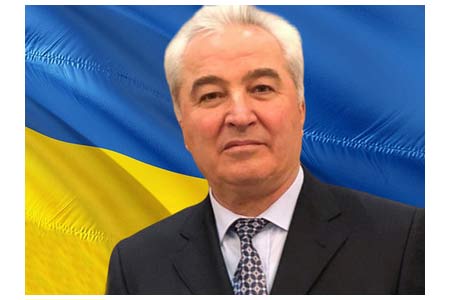 ArmInfo. Newly appointed Ambassador of Ukraine to Armenia Ivan Kuleba handed over copies of his credentials to Minister of Foreign Affairs of the Republic of  Armenia Zohrab Mnatsakanyan. This is stated in the official statement  of the Embassy of Ukraine in Armenia.

According to the source, emphasizing the centuries-old traditionally  friendly relations between the Ukrainian and Armenian peoples, during  the conversation, I. Kuleba and Z. Mnatsakanyan discussed bilateral  relations, including the prospects for economic and humanitarian  cooperation.

At the same time, the interlocutors discussed the process of  implementing the Consultation Plan between the Ministry of Foreign  Affairs of Ukraine and Armenia for 2019-2020. In particular, the need  to resume the activities of the joint Armenian-Ukrainian  intergovernmental Commission on Economic Cooperation was emphasized.

To recall, before the appointment of Ivan Kuleba, General  Piotr  Litvin, who was appointed by order of the former President of Ukraine  Petro Poroshenko in June 2018, held the post of Ambassador of Ukraine  to the RA. With the advent of Volodymyr  Zelensky , Litvin was  relieved of his post. Before Litvin, Ukraine had no ambassador in  Armenia for almost three years. Petro Poroshenko recalled the  previous head of the diplomatic mission of Ivan Kukhta back in July  2015 as a reaction of Ukraine to the official position of Yerevan in  the Crimea.