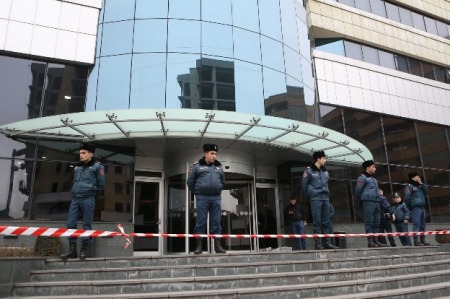 ArmInfo.  An unknown man, who opened fire in the Yerevan Erebuni Plaza Business Center, surrendered his weapon following the results of negotiations. On January 23,  Ashot Aharonyan, head of the RA Police press service, told reporters  about this.

According to him, the acting head of the Armenian Police Arman  Sargsyan personally held talks with the shooter. <At the moment, the  situation is stable, and is under control. According to preliminary  data, there are no casualties>, he said.

On January 23, at 2:40 p.m., the Police received a message stating  that there was an armed person in Erebuni Plaza. Appropriate work is  being done. According to media reports, the unknown man also took  hostages.

Prime Minister of the Republic of Armenia Nikol Pashinyan reacted to  the news about the shots at Erebuni Plaza. <Any manifestation of  violence, for any reason or on any basis, is unacceptable. No to  violence!>, he wrote on his Facenook page.