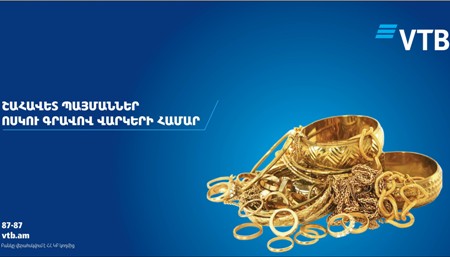 ArmInfo. VTB Bank (Armenia) offers to issue pawnshop loans secured by gold products under the most favorable conditions. According to the bank's official statement, the annual nominal  interest rate on these loans is from 2% to 13.5% for AMD loans, from  1% to 9% for USD, with an effective annual interest rate of 10.6-24%.

The loan amount is set in the range from 30 thousand to 3 million  drams (equivalent in dollars), in particular, a loan is issued in the  amount of up to 150% of the estimated value of gold. The loan  repayment period is from 80 days to 5 years, and the repayment  mechanism is chosen by the client at his discretion.

According to the report, when applying for a loan secured by gold, a  decision on granting a loan and its execution takes place within  minutes. In addition, to obtain a loan, a minimum set of documents is  required (an identity document and a public services number (social  card). If necessary, the bank can provide funds to repay a customer's  existing loan at another bank and obtain a new loan at VTB Bank  (Armenia) for more favorable terms.

At the same time, VTB Bank (Armenia) offers to use the repurchase  service of loans secured by gold from other banks and credit  organizations with the possibility of increasing the loan amount by  10%. Loyal customers who borrow loans secured by gold products of VTB  Bank (Armenia) during the loan are given the opportunity to increase  the amount of the existing loan to 10%.

More detailed information on lending conditions at VTB Bank (Armenia)  can be obtained at the Bank's branches, at www.vtb.am, in the Contact  Center at 87-87.

It should be noted that VTB Bank (Armenia) CJSC became a member of  VTB International Financial Group in April 2004. Currently, the  second largest VTB Bank PJSC in Russia owns 100% of the shares of VTB  Bank (Armenia). The Bank traditionally ranks among the leaders of the  banking system of the Republic of Armenia in terms of key indicators  and holds the lead in terms of coverage of the branch network.