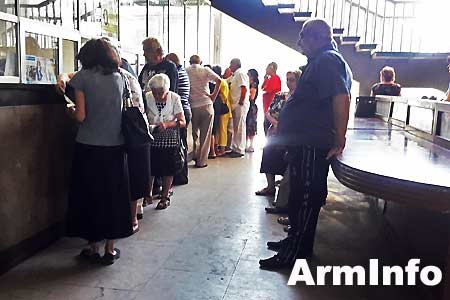 ArmInfo. In the near future, a draft law will be submitted to the National Assembly of Armenia aimed at limiting the cash turnover of pension payments. Deputy  Minister of Labor and Social Affairs of the Republic of Armenia Smbat  Saiyan announced this on January 22 from the rostrum of the  Parliament.

According to him, the banks themselves are interested in the non-cash  circulation of pension funds in the total amount of about 400 billion  drams, as this will increase their competitive capabilities.  Currently, cash pension contributions are made through both  commercial banks and HayPost. Since 2011, the Government of the  country has concluded and is concluding contracts with the country's  commercial banks for the provision of services to pensioners. At that  time, the ratio was 15% to 85% in favor of HayPost. Today, this  figure is 50% to 45% in favor of banks.

Annually in the form of commissions, the state sends Haypost 1.4  billion drams (1% of each pension amount) and 30-35 million drams to  the country's commercial banks (30 drams for each pensioner). In  general, as the deputy minister noted, the government is striving to  ensure non-cash payment of pensions, which will avoid corruption  risks and increase the effectiveness of the state pension system.

The deputy minister also said that in the near future an agreement on  pensions for workers of the EAEU countries will be submitted to  parliament.

Meanwhile, to note, many pensioners are dissatisfied with the work of  the HayPost company, which, as a rule, makes pensioners stand in long  lines for a pension and rarely carries it home. Virtually no HayPost  service provides citizens in cashless form, which indicates a high  cash turnover in the company and, as a consequence, the possible  presence of corruption risks here.