The formation of a new government in Lebanon, which included an  Armenian, did not stop the protests in the country 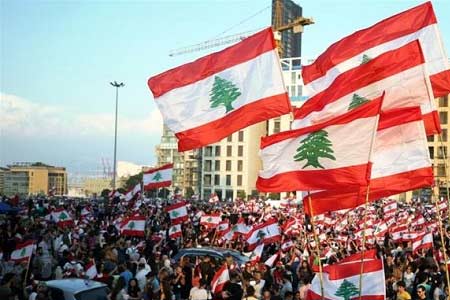 ArmInfo.Twenty representatives of the Christian and Muslim communities of Lebanon  joined the new government of the republic under the leadership of  Prime Minister Hassan Diab. This is stated in the press service of  the President of Lebanon, Michel Aoun.

The Prime Minister of the new government, Hassan Diab, is a native of the academic community - before taking office, he was vice-rector of the American University  of Beirut. Diab has already said that the new government is a rescue  team, which now faces the main task - to restore and maintain  stability in the country.

So, according to the message, the posts in the new Diab team in  particular were: Marie Claude Nizhm (<Free Patriotic Movement>). Born  in Beirut on April 6, 1971. Professor at the Faculty of Law and  Political Science at St. Joseph University in Beirut, head of the  Department of Private Law and Director of the Center for Human Rights  Studies in the Arab World, who has served as Minister of Justice.   Michel Ibrahim Najar (Marada movement) became Minister of Public  Works and Transport. Born December 17, 1958. He graduated from the  American University of Beirut. He continued his studies at Oklahoma  State University, where he received a doctorate in civil engineering.   Minister of Social Affairs and Tourism Ramsey Mushrifiya (Lebanese  Democratic Party>) is an orthopedic surgeon who graduated from  American University in Beirut and then studied in Britain. In 2005 he  was appointed professor of the Department of Orthopedics at the  University of Balamand.  Minister of Finance - Gazi Uazni (Amal).  Born July 20, 1954, married, has three children. He has a doctorate  in economics. Fell in love in France. Founder of several banks in  Africa.  Minister of Foreign Affairs - Nassif Hatti (<Free Patriotic  Movement>). He has a doctorate in international relations from the  University of Southern California (1980), before that he received a  bachelor's degree in political science (1975) and a master's degree  in political science (1977) from the American University of Beirut.  He held a number of high posts in the Arab League.  Minister of Labor  Lamia Yammin al-Dueehi (Marada Movement), born in 1974. She received  a master's degree in architectural design in Tripoli. From 2002 to  the present he teaches at the University of Lebanon.  Minister of  Energy Raymond Gajr (<Free Patriotic Movement>) received a bachelor's  degree in electrical engineering from the University of Ottawa in  Canada, and a master's degree in electrical engineering from the  Canadian University of Saskatchewan. In 1993, he received his  doctorate in electrical power systems.  He served as Deputy Dean of  the College of Engineering from 2013 to 2018. Since 1992, he worked  in Canada, the USA, Europe and the Middle East. In 2008, he served as  Senior Advisor to the Minister of Energy for Political Affairs.   Minister of Youth and Sports - Vartini Ohanyan (<Dashnaktsutyun>),  born in 1984. She taught a bachelor of social sciences at the  University of Lebanon. Worked as a social worker including in the  Armenian Orthodox Diocese in Lebanon.  Minister of Communications -  Talal Havat. Born in Tripoli in 1969. In 1998, he received a master's  degree in electrical engineering from the University of San Jose,  California. For many years he held posts in the field of  communications in Lebanon.  The Minister of Health is Hamad Ali  Hassan (Hezbollah). Born in 1969 in Baalbek. Graduate of the Moscow  Medical Academy of Sechenov, former mayor of Baalbek.  Information  Minister - Manal Abdel Samad. She held the position of Head of the  Tax Law Department at the Ministry of Finance. He lectures at the  University of St. Joseph in Beirut. She received her doctorate in law  from the Sorbonne.  In fact, in the new team of the Lebanese Prime  Minister, ministerial seats were divided between faiths in the  following order: the Maronites have four ministers, the Orthodox  community will be represented by three ministers, the Catholics will  be represented by two ministers, the Shiites and Sunnis will have  four ministerial seats, the Armenians will be represented by one  minister, and the Druze the country's population is two ministers.   Despite the formation of a new government, protests throughout  Lebanon did not stop. On the contrary, they resumed with renewed  vigor immediately after the announcement of a new government. Riots  and clashes with police occurred in Beirut and Tripoli.  The economic  and financial situation in Lebanon continues to deteriorate. The  president of the country, Michel Aoun, announced in early October  that the country was suffering from financial blockade and sanctions.  There is also a shortage of currency in the banking sector. Suspended  transfers to foreign accounts, the issuance of dollars is limited to  1 thousand per week, the percentage of commission for issuing foreign  currency in cash is increased. Private entrepreneurs refuse to accept  payment by bank transfer. At the same time, the Lebanese pound  against the dollar two months ago began to fall for the first time in  30 years and reached 2,500 pounds per dollar, while the central bank  continues to maintain the previous exchange rate of 1,515 pounds.  In  October, anti-government demonstrations began against this backdrop.  Protesters demand economic reform and prosecution of officials  involved in corruption schemes. At the end of October, against the  backdrop of protests, the government of Saad Hariri resigned, after  which the country lived in a government vacuum for almost three  months until the announcement of the new government of Diyab on  January 21.