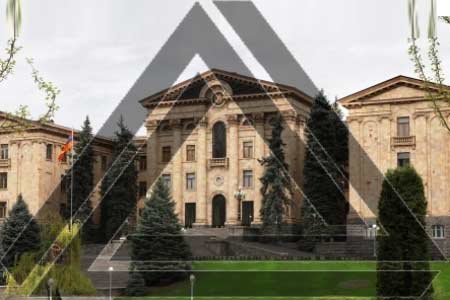 ArmInfo. The parliament of Armenia has a paradoxical situation related to determining the composition of the members of the commission for the study of  agreements (since September 2018) on the transfer of vehicles and  other property to the Yerevan City Hall, the provision of services by  various entities, the transfer by the community of Yerevan of real or  movable property, including property , as well as non-property  rights, building permits related to them.

The day before, the commission was created by force of law in the  National Assembly of the Republic of Armenia, however, at the  parliament meeting on January 22, the ruling faction "My Step" did  not take part in the voting on the composition of the members of the  commission. Speaker of the parliament Ararat Mirzoyan, noting the  paradox of the situation, called on to work out mechanisms for  overcoming the current situation. "Maybe by amending the law" On the  Rules of Procedure of the National Assembly "or in an institutional  format," the head of the legislative body emphasized. He did not  agree with the opposition's statements that the ruling majority did  not want to investigate corruption risks in the metropolitan  municipality, stressing that in Armenia all branches of government  should be guided by the requirements of the Constitution and laws of  the country. The speaker noted that the commission was created, and  now it is necessary to find opportunities to resolve the issue of its  composition.

In turn, the head of the "My Step" faction Lilit Makunts emphasized  that the National Assembly has no constitutional right to interfere  in the affairs of the community. This prerogative, noted Makunts,  belongs to the Council of Elders of Yerevan.

However, according to the head of the Enlightened Armenia opposition  faction Edmond Marukyan, the first time this happens in the country's  parliament, this was not even in the parliament of the previous  convocation. "You are afraid to investigate corruption risks in the  Yerevan Municipality, and who said that the National Assembly has no  right to study possible violations in the country's communities,"  Maukyan said, referring to the parliamentary majority.

On the eve, it was announced that the commission was established by  force of law, since one fourth of the deputy corps signed the  decision.

Since the end of November 2018, the Enlightened Armenia faction has  received signals that the Yerevan Municipality is providing  incentives for donations in the form of movable property in exchange  for granting building permits and legalizing illegal buildings.  Despite the fact that donations have entered an active phase since  spring Nevertheless, in 2019 there is still no list of donors and  donation volumes, thus, the mayor's office ignored the interests of  the community, not ensuring transparency and openness in its  activities. The parliamentary commission, which will investigate the  principle of accountability, is foreseen that the commission will  consist of 11 people and will conduct an investigation within six  months.  Recall that after prolonged criticism the City Hall recently  released a list of organizations and individuals who donated 21  garbage trucks to Yerevan. According to the list presented by the  mayor's office, for example, 14 garbage trucks were presented by LLC  N and S Construction, 3 garbage trucks - LLC "Alex and holding". This  list, according to the Hatk publication, is related to relatives of  former and current officials. For example, Alex & Holding LLC is  associated with the name of the former deputy, businessman Samvel  Aleksanyan.

Yerevan Mayor Hayk Marutyan the other day during a live broadcast on  Facebook, referring to the opposition's statements, called them  misinformation. He submitted documents, claiming that building  permits were issued much earlier, they are not related to donations,  and donors do not receive any benefits.