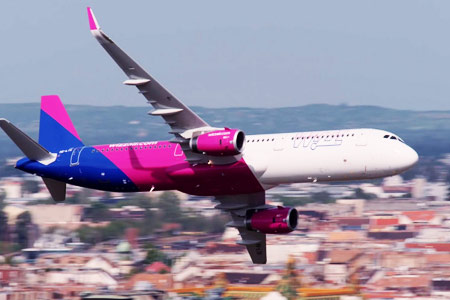 ArmInfo.The public organization "Union of Armenians of Ukraine" took the initiative to launch a flight Zaporozhye - Yerevan. This is stated in the message  of the Union received in ArmInfo.

Expressing satisfaction with the entry of Wizz Air into the Armenian  market, the Union of Armenians of Ukraine recalls that the country  has a 300,000-strong Armenian diaspora, which could be a promising  area for the development of family tourism. At the same time,  Zaporozhye is a territorially profitable hub, since about 100  thousand Armenians live in the Zaporozhye-Dnepr-Krivoy Rog-Mariupol  conglomeration (within a radius of 200 km). A new terminal is  currently under construction at the Zaporozhye international airport.  Thanks to the established communication with the Armenian communities  in 23 regions of the country, the Zaporozhye-Yerevan flight will  receive a decent distribution, as a result of which the annual  increase in the tourist flow in Armenia will be 20%.

"If Wizz Air is interested in this project, the Union of Armenians of  Ukraine is ready to contribute to the promotion of this direction not  only among the Armenian diaspora, but also throughout the country. We  delegate all the powers to develop this issue to the chairman of the  Armenian community of the city of Kamensky Roman Chobanyan and  support all his further actions>, the Union said in a statement.   Earlier, Arminfo, citing Wizz Air's Director of Corporate Relations  Andras Rado, reported that from April 2020 the airline will enter the  Armenian passenger transportation market. He said that at the initial  stage the company launches two directions: Vienna - Yerevan - Vienna  and Vilnius - Yerevan - Vilnius. In particular, regular flights to  Vienna start from April 3 (Mondays and Fridays) and to Vilnius from  April 5 (Wednesdays and Saturdays). The minimum cost of a one-way  ticket is 24.99 euros (including hand baggage). According to him, the  company will further expand the geography of air travel from  Zvartnots airport in Yerevan.

Note that Wizz Air is a Hungarian low-cost airline headquartered in  Budapest. For 15-16 years, the number of passengers reached 225  million per year. The company operates 120 aircraft type A321neo. The  company is based at 25 European airports and flies to 153 world  airports. Wizz Air is a public company, its shares are listed on the  London Stock Exchange (LSE), the capitalization level reaches 5  billion euros.