Butchers hold another protest in front of Government building 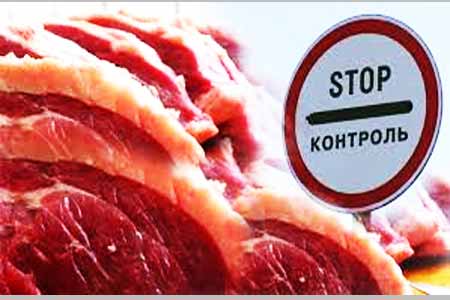 ArmInfo. On January 20, in   front of the Government building, butchers hold a protest rally against a decision that entered into force, according to which only  meat from slaughterhouses is allowed for sale in Armenia.

In an interview with reporters, protesters noted that the market is  not fully settled today, which creates additional difficulties for  farmers. This, in particular, concerns a small number of existing  slaughterhouses, the sanitary and epidemiological state of which, as  well as the size of the amount that is charged for slaughtering  livestock, also raises questions for farmers. In this regard,  according to them, the introduction of this requirement without  solving current problems can adversely affect the livestock sector,  and put farmers in the prospect of extra spending money for the right  to use the slaughterhouse. Some of the protesters pointed out that  they had previously taken loans to develop their farms, and the  decision that came into force put them in a difficult position due to  their negative impact on the business and, consequently, the  reduction in expected profits. In this regard, it was pointed out the  need to postpone the decision for several months. According to them,  protest mood reigns among farmers operating in different regions of  the republic.

In protest, over two hundred farmers closed Tigran Mets Avenue. After  negotiations with police, the street was open for traffic, and  protesters again moved to the government building, demanding a  meeting with officials.

Earlier, Arminfo, referring to  head of the State Food Security  Service of the Republic of Armenia Georgy Avetisyan, reported that  from January 15 only meat from slaughterhouses will be allowed to be  sold in Armenia. <I want to disappoint all those people who think  that after the next checks they will be limited to just a warning.  This time has passed. From January 15, we will fine for violations. I  think we've been warning about it for quite long time >, he noted.  According to Avetisyan, today there are 17 slaughterhouses in the RA,  and 26 are under construction. Referring to a statement by the  slaughterhouse management, he said that the latter would be ready by  the beginning of 2020. In general, according to estimates, as the  head of the State Security Committee of Armenia noted, about 70  slaughterhouses are needed, however, at this stage, the available  quantity can cover the entire market. We add that earlier, protests  by livestock breeders have already taken place at the Government  building.