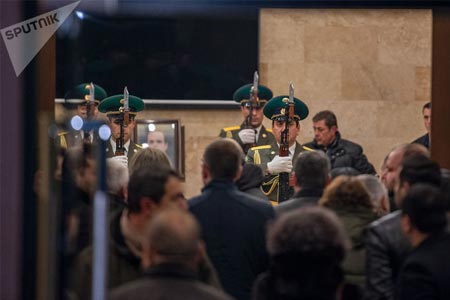 ArmInfo.The investigation has enough facts testifying to the suicide of the former head of the National Security Service of Armenia Georgy Kutoyan. The Prosecutor  General of Armenia Arthur Davtyan said this at a funeral for Kutoyan  in an interview with reporters.

He noted that a criminal case had been opened on the grounds of the  article of the Criminal Code "bringing to suicide", however, the  investigation received enough evidence that there was a suicide.  Davtyan also stated that during the investigation all versions  typical of the investigation would be checked for any fatal case.

In turn, the head of the Security Council of Armenia Armen Grigoryan  stated that the country's authorities are interested in the fact that  the investigation of the death of ex-head of the National Security  Council, George Kutoyan, was as open as possible. When asked by  journalists about whether there was a need to ensure the safety of  Kutoyan, given the fact that the latter had exceptional information,  the head of the Security Council said that the investigating  authority reports everything that is needed. "If a security question  arises, I assure you, the Investigative Committee will report this>,"  Grigoryan emphasized, noting that this case should not be considered  in a wide context. Deputy Head of the National Security Service of  Armenia Aram Hakobyan refused to comment on the death of Kutoyan  stating that he worked with the last two years. "We do not understand  what happened. Georgy Kutoyan was an honest and dedicated person.   I'm sure that law enforcement agencies will establish the cause of  his death, "said Hakobyan.

When asked by reporters whether Kutoyan, in his opinion, was  suicidal, Hakobyan said he could not answer this question. The deputy  head of the NSS also noted that the death of the ex-head of the SNB  should not be connected with the events of March 1, 2008, since there  were no questions regarding Kutoyan, he was never summoned for  questioning.

According to the investigation, the ex-head of the SNB, after  returning to Armenia, lived in his father's house, however, he  occasionally visited his apartment on Paruyra Sevak Street. In  December 2019, Kutoyan drank alcohol, after which he randomly fired a  Glock 34 pistol 35 times at the wall between the kitchen and the  living room. After some time, Kutoyan's wife, at the request of the  latter, collected the shot cartridges and laid them on a table  opposite the sofa.

On January 16, 2020, Kutoyan, having warned his relatives in advance  that he wanted to relax for a couple of days in his apartment on  Paruyra Sevak Street, went there. On January 17, Kutoyan's relatives  could not get through to him and drove to the apartment mentioned,  where his wife found her husband's body on the couch.

Recall that Georgy Kutoyan held the post of head of the National  Security Council of the Republic of Armenia from 2016 to 2018. After  Kutoyan left the NSS, some documents disappeared, mainly related to  the case on March 1, 2008. A criminal case has been instituted on the  fact of the death of the latter under the article of bringing to  suicide.