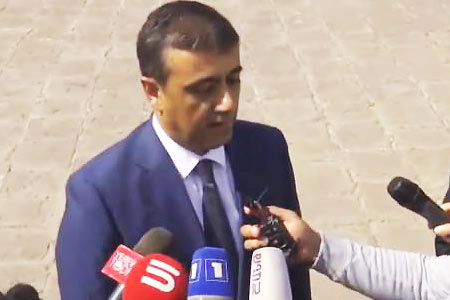 So,  the message of the NSS of the Republic of Armenia received by  ArmInfo notes, that  the news of Kutoyan's untimely death was painful  and shocking. "Kutoyan, despite his short tenure as director of the  NSS, managed to earn the respect and trust of his colleagues. He was  a highly qualified, well-educated, conscientious and responsible  officer and, despite his young age, an experienced official.

I am convinced that both those who investigate the circumstances of  the death of Georgy Kutoyan, and all other law enforcement bodies of  the Republic of Armenia, including the National Security Service,  will do everything possible to give comprehensive answers to many  questions raised by this tragedy.

On behalf of all personnel of the National Security Service of the  Republic of Armenia and on my own behalf, I express my deepest  condolences to the family members, relatives, friends and colleagues  of Georgy Kutoyan, "Martirosyan said in a statement.

To recall, in one of the apartments on Paruyr Sevak Street in Yerevan  on January 17, the body of the former director of the National  Security Serviceof Armenia, Georgy Kutoyan, was found with a gunshot  wound.  The body was discovered by his wife. Law enforcers found  weapons and dozens of bullets and shells at the scene. A criminal  case was instituted under Article 110 of the Criminal Code of Armenia  (bringing to suicide), however, the SC did not exclude that in  consequence the case could be qualified as murder.  Everything will  depend on the results of the materials collected based on the results  of multiple examinations.