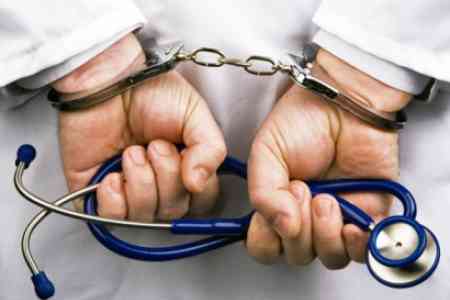 ArmInfo. The director of the Meghrinsky Regional Medical Center is accused of abuse.

According to the Investigative Committee, during the investigation it  became clear that the director of the MC, using his official  position, for personal gain, by entering knowingly false information  in official documents and falsifying documentation, in the period  from January 1, 2017 to December 2019, assigned him other people's  property in substantial amounts.

As a result of the particular, it was found that in the indicated  period, in order to reduce the financial expenses of the MC and  provide additional financial flows from other sources, on the basis  of a different personal interest, the director of the medical  institution instructed to draw up documents on incapacity for work of  employees of the infectious diseases department without appropriate  justification. Based on the false documents drawn up, the said  employees were paid temporary disability benefits at the expense of  the state budget, causing substantial damage to the legitimate  interests of the state. In addition, patients with infectious  diseases to be treated under special conditions, for a long time  received inpatient treatment in the somatic department, creating a  significant danger to the life and health of other patients. Also, by  compiling false documentation, allegedly for the needs of the "First  Aid" fuel was issued and assigned in the amount of 1.080.275 drams.