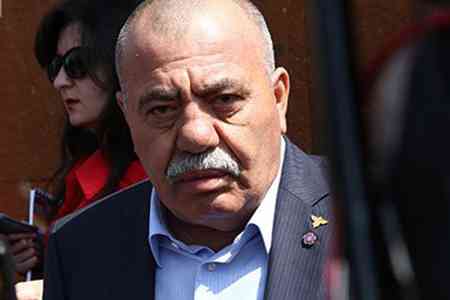 ArmInfo.The court of general jurisdiction, presided by Mnatsakan Martirosyan, decided to change the measure of restraint in relation to the former lawmaker of  Armenia, General Manvel Grigoryan from arrest to subscription on not  to leave the place.

It should be noted that the prosecutor's office of Armenia filed a  motion to change the measure of restraint against General Grigoryan,  taking into account the state of health of the latter. General's  lawyer Levon Baghdasaryan said the defense joins the prosecutor's  petition.

The General has long suffered from various diseases, according to the  statement of his lawyers incompatible with detention. However, on  January 14, the General's condition deteriorated sharply and he was  transferred to intensive care. Then, on January 15, at the initiative  of the prosecutor's office, an extraordinary court session was  convened to discuss a preventive measure against the former lawmaker.   Employees of the Nairi medical center sent a document to the court  stating that on January 14, Manvel Grigoryan's condition worsened and  his heart rhythm disturbance was detected, which could lead to his  arrest.

During the court session, this document was also examined by the head  of the interagency commission, which had previously assessed his  state of health, Gagik Harutyunyan, noting that the life of  Grigoryan, according to this document, is really in danger.

To note, Manvel Grigoryan is accused of illegal possession of weapons  and ammunition in a preliminary conspiracy with his wife Nazik  Amiryan, son Arman Grigoryan. The general is also charged with  misappropriation of property allocated for the needs of military  personnel and volunteers protecting the borders of the Artsakh  Republic in the April four-day war and the following days, tax  evasion, embezzlement of state funds and organizing property theft  with extortion. Grigoryan has been under arrest for 1.5 years.