Businessman of Armenian descent demands justice from Pashinyan,  telling how a business worth $ 1 mln was taken from him using a fake  signature 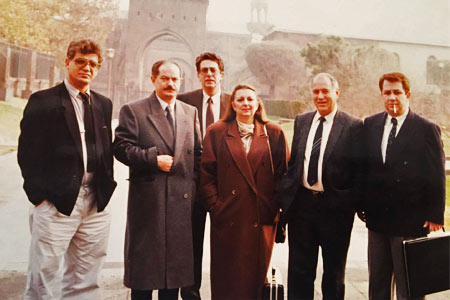 ArmInfo.Current owner of the R & V Comfort construction company Ruben Shahmuradyan has appropriated the business of an Armenian-born entrepreneur Hrant Khartuni by forging the signature in a fictitious contract for the sale of  property owned by Khartuni. At a press conference today former owner  of the company, Hrant Khartuni told about the circumstances under  which this corruption deal was committed.

It should be noted that today Ruben Shahmuradyan is a member of the  Council of the Union of Industrialists and Entrepreneurs of Armenia  and the owner of the construction company R & V Comfort, which is one  of the 100 largest enterprises in Armenia. In 2016, his son Karen  Shahmuradyan was a lawmaker of the National Assembly of the Republic  of Armenia from the ARF "Dashnaktsutyun" faction and co-founder of  the "Karkomavto" company.

For information, Hrant Khartuni, a defrauded businessman of Armenian  origin, was one of the first importers who imported building  materials, stones, plates and food products from Iran to Armenia in  the 1990s.

After meeting with Ruben Shahmuradyan, Khartuni, together with his  business partner, in 1995 created a joint Armenian-Iranian enterprise  "Irarshis" with a constituent capital of 50 thousand drams. In the  2000th year, the company acquired an area of 8,000 square meters  located on Tigranyan street. According to current estimates, the cost  of real estate is from 800 to 1 million dollars, the cost of  equipment is about 500 thousand US dollars.

According to Khartuni, all investments were made directly by him.  However, due to health reasons, the businessman was forced to leave  for the United States, where he underwent several heart operations,  and doctors forbade him to fly over the next few years.

After Khartuni completed the treatment, he returned to Yerevan,  however, he was not able to enter his own enterprise, since he was no  longer the owner of the premises.

<When I started the proceedings, I was presented with a document in  the cadastre that in 2002 a contract was signed for the sale of  property, in which I sell my 50% share of the property for 25  thousand drams to Ruben Shahmuradyan's wife, and all the property  goes to his brother Vardan Shahmuradyan", - Khartuni says.

During the trial, Khartuni stated that he could not sign this  contract, as he was in the USA, where he underwent several heart  operations, but he was told that the contract was concluded not in  Yerevan, but in one of Tehran's hotels.  Then, post-factum evidence  was presented that Khartuni had several heart operations in Los  Angeles and was forbidden to fly, indicating that he was physically  unable to be in Iran or Armenia at that time and accordingly he could  not sign this agreement.  Member of the Chamber of Advocates of  Armenia Mnatsakan Ghazaryan, in turn, explained that the agreement on  the creation of the R and V comfort company (current name <R&V  Comfort>) was concluded in a notary office with falsification of the  signature of Khartuni and incorrectly indicated initials.

<Any major transaction was to be completed strictly in a notarial  order. The Law "On LLC" requires the consent of the general meeting  of the founders to decide on a major transaction, but there was no  order, no protocol, no signature, absolutely nothing>, he said,  noting that after Khartuni tried in court to achieve justice, the  court refused to institute criminal proceedings based on a fictitious  signature of the latter.

After lengthy litigation, the desperate Khartuni returned to the  United States in 2006, but after the "velvet revolution" he met with  the NA President, Ararat Mirzoyan, in Los Angeles, the latter  promised that he would be able to achieve justice in the presence of  facts and necessary documents due to the change of domestic situation  in the country.

Khartuni noted that due to the corruption of the judicial system he  could not achieve justice, therefore, after the statements of Prime  Minister Pashinyan, he returned to Armenia, trying to restore justice  and the right to property.

Returning to Armenia in 2018, he again went to courtrooms, but the  situation in the courts has not changed, and the same people are  sitting in their offices. However, the businessman assures that he  will not back down, and that he will fight to the last.

Mnatsakan Ghazaryan said that in the case of the appropriation of  property, a civil process has been started, however, what will be the  fate of the process in the criminal case remains unknown, expressing  concern about the limitation period of the case. However, he referred  to an article requiring recognition of the right to property, noting  that the process would be difficult.

To note, according to statistics, out of repeated 100% cassation  complaints, only 5% are accepted, of which 2.5% are satisfied, the  remaining 2.5% are rejected. According to the defense, the earlier  court verdicts in this case serve as an iron shield and defense for  the Shahmuradyan family and relieve them of legal proceedings.

Shahmuradyan behaves quite freely, both in the context of the  limitation of the case, and in connection with the scale of finances  that allow him to arm himself with an army of lawyers, but the fact  remains that Khartuni was deceived.

According to Khartuni, American and Iranian investors of Armenian  descent are not in a hurry to invest in Armenia and carefully monitor  what outcome the story of people like Hrant Khartuni will have. "The  investors I know in my circle are like old people with a wand in  their hands, being careful and looking around," he said, noting that  the Armenian Diaspora requires justice.