Arthur Vanetsyan: My warning about the dangers threatening the  country`s security also concerned the situation with the  Constitutional Court 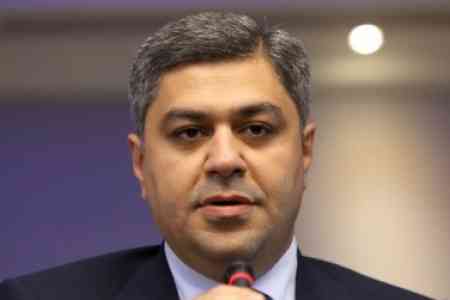 ArmInfo. Former head of the National Security Service Arthur Vanetsyan touched on the situation around the Constitutional Court in Armenia.

In particular, on his Twitter microblog page, the former head of the  National Security Council, in particular, noted: "My warning about  the dangers threatening the country's security was also connected  with the events that take place around the Armenian Constitutional  Court."

It should be noted that on September 16, 2019, Arthur Vanetsyan  resigned from the post of head of the National Security Council of  Armenia. Vanetsyan himself, commenting on his resignation, on the  Facebook social network, in particular, wrote that "spontaneous  decisions, sweeping actions, the absence of differences between the  primary and secondary are not the way that leads to the achievement  of goals." After his resignation, the former head of the  NSS several  times noted that there are a number of factors threatening the  country's security.

In his turn, the Prime Minister of Armenia Nikol Pashinyan criticized  this statement of Vyaanetsyan.  During the press conference,  Pashinyan, in particular, stated that the words of the former head of  the SNB violate the officer's code, since he, being the ex-director  of the SNB, makes a statement, in fact, against his Supreme  Commander, and there cannot be a more disrespectful attitude to the  honor of the officer.. The prime minister compared the behavior of  Vanetsyan with the actions of the coup in August 1991. Pashinyan also  noted that this action can be qualified as throwing epaulettes into  the ballot box.

In turn, the Prime Minister's daughter Mariam Pashinyan published an  article from the Haykakan Zhamanak newspaper on her Facebook page  (the editor-in-chief is the wife of the Prime Minister of Armenia  Anna Hakobyan - Ed.) reading  that Arthur Vanetsyan is actively  sponsoring campaign against the family of Nikol Pashinyan.