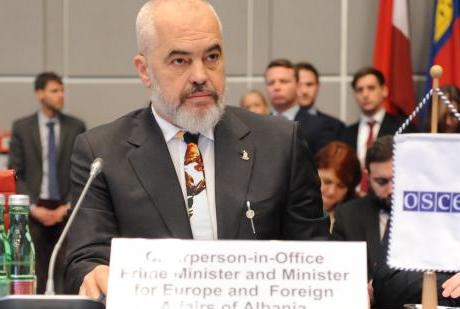 ArmInfo.Conflict resolution efforts such as those of the Minsk Group Co-Chairs on the Nagorno-Karabakh conflict, the Geneva International Discussions and related mechanisms, and the Transdniestrian Settlement Process will be high on the Chairmanship's agenda, OSCE Chairperson-in-Office, Albania's Prime Minister and  Minister for Europe and Foreign Affairs, Edi Rama noted in his  address to the OSCE Permanent Council held today in Vienna.

Recalling the Helsinki Final Act of 1975, a landmark politically  binding document signed by States of the then Conference for Security  and Co-operation in Europe (the forerunner of the OSCE), Rama said  that his country had directly benefitted from this agreement's  principles on peace and security.

"As I sit today in this chair, I cannot but pay tribute to all those  who fought, suffered, died for Albania's freedom and thank all those  who worked hard and contributed in various ways through the long  tortuous path of our democratic transition from a brutal dictatorship  to a functioning democracy - including also all those who accompanied  us in that path. Among them, OSCE was one of the key presences," he  said. "I feel today all the huge responsibility as well as the great  opportunity of having to give something back to our Organization  after the OSCE has given so much to Albania for so many years.", he  said.  "The OSCE has proven time and again that it can deploy to   conflict and post-conflict settings, often where and when no one  else can.

"We will endeavour to use all OSCE instruments to advance a mutual  understanding on today's security challenges, starting from the  Structured Dialogue, and reducing risks through our confidence- and  security-building measures," said Rama.