On fact of abuses related to name of former head of FFA, criminal  case was instituted under several articles of  RA Criminal Code 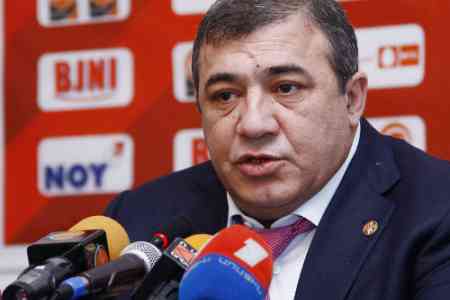 ArmInfo. On the fact of the abuses connected with the name of the former head of the Football Federation of Armenia Ruben Hayrapetyan, the criminal case was  instituted according to several articles of the RA Criminal Code.

A criminal case was instituted on the grounds of part 2 of article 315  (negligence, which entailed grave consequences due to negligence),  part 3 of article 179 (assignment on an especially large scale), part  2 of article 325 (forgery of documents by a group of persons) and  part 2 of article 214 (abuse of authority employees of commercial or  other organizations, entailing grave consequences) of the Criminal  Code of the Republic of Armenia.  The Press Service of the  Investigative Committee confirmed that the IC has received the case.    To recall, last week, law enforcement officers raided the house and  other facilities owned by Ruben Hayrapetyan. According to media  publications, in 2012-2018 Hayrapetyan acted as the organizer of  repair and construction work in the stadiums and sports schools of  the republic. At the same time, fraudulent acts were drawn up  regarding the work carried out, which allowed the appropriation of  funds in especially large amounts. To note, Hayraptyan headed the  Football Federation of Armenia for several years, and after the  "velvet revolution" he resigned. On September 22, 2018,  then  Director of the NSS, Arthur Vanetsyan, was elected head of the FFA.  On November 21 of this year, after the devastating defeat of the  Armenian team at a match with Italy during the qualifying round of  Euro 2020 with a score of 1: 9, Vanetsyan resigned.