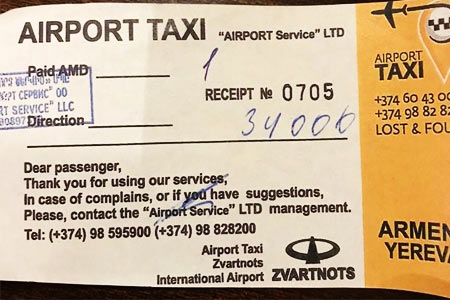 Thus, yesterday a photograph of a taxi receipt was circulated on the  network, which shows that a German citizen for servicing the route  from the airport to the Marriott Hotel on Republic Square, was  charged 34 thousand drams. Meanwhile, the average price from the  airport to the Yerevan center ranges from 2000 to 4000 drams,  depending on how you agree with the taxi driver and the taxi meter.

"We also wanted to emphasize that the service coupon shown in the  photo was fake and does not belong to Yandex Taxi. CJSC has repeatedly voiced the presence of  this problem and appealed to the appropriate authorities to address  the issue and identify persons involved in fraud. Dear passengers, we  urge you , in order to avoid similar problems in the future, use only  the services of trusted taxis, "the press service said.