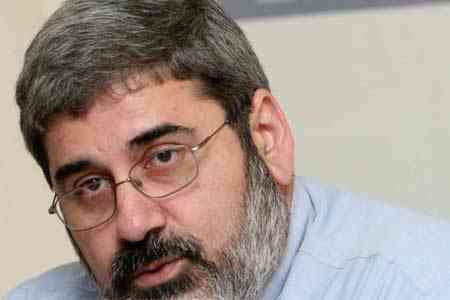 ArmInfo.The attitude of the Prime Minister of Armenia Nikol Pashinyan to the activities of the Dashnaktsutsiun ARFD resembles the two-faced nature of the first President of the Republic of Armenia Levon Ter-Petrosyan, which  manifested itself towards the party.

This was stated at a press conference by the head of the "Hay Dat" office and political issues, a member of the ARF Bureau "Dashnaktsutyun" Kiro Manoyan, answering ArmInfo's question regarding the statement of Pashinyan, in which he calls the Dashnaks a political force with zero public influence.   According to Manoyan, on the one hand, Pashinyan says a lot of good  things about <Dashnaktsutsiun>, and about the readiness for  cooperation, calling the Dashnaks a party of national value, but if  the country's leadership meets resistance from the ARF, for example,  the government's program, criticism voiced by the party is met with a  blow .

<Pashinyan always tried to divide the "Dashnaks" into internal and  external, leaders into former and current. This is bad practice, this  needs to be put an end to,> Manoyan urged, however, noting that this  kind of separation does not work in the case of the Dashnaktsutsiun  party.

Manoyan also called unacceptable the fact that during the protest  rally demanding the resignation of the Minister of Education,  Science, Culture and Sports Araik Harutyunyan, which was initiated  directly by the youth wing of "Dashnaktsutsiun", Pashinyan accused  the protesters of being bad manners and at the same time indicated  effective cooperation with the Dashnaks deploying their activities  abroad.  Manoyan warned: "If the division into internal and external  Dashnaks begins in Armenia, then in the light of such an atmosphere,  the foreign structures of the ARF will be forced to stop  cooperation," adding that this outcome is in no one's interests.