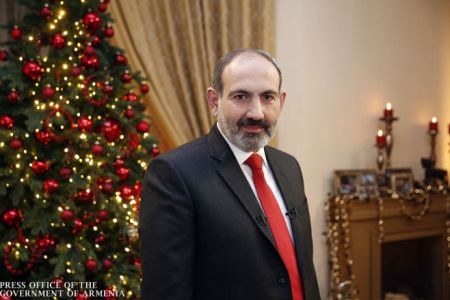 ArmInfo.The New Year's message from the Prime Minister of Armenia Nikol Pashinyan will be broadcast from the square of the Republic of Yerevan. Hovsep Kubatyan, head of the Yerevan Municipality Information Department,  wrote about this on his Facebook page.  "For the first time in  history, the New Year's message from the Armenian leader, in this  case, Prime Minister Nikol Pashinyan, will be broadcast live from  Republic Square," Kubatyan said.

Earlier, ArmInfo reported that the celebration of New Year and  Christmas in Yerevan this year will be held on an unprecedented  scale: the capital's city hall intends to spend about $ 700 thousand  (326 million drams). Meanwhile, according to Temine Vardanyan, a  member of the Luys faction of the Council of Elders of Yerevan, the  New Year's expenses did not exceed 40-50 million drams ($ 80-100  thousand) annually.

This year, lights on the main Christmas tree of the country will be  lit on December 21 at 20:00 on Republic Square in Yerevan. There will  be the same tree as in the past. Its beginning will be marked by a  musical with the participation of famous artists who will appear  before the audience in completely new images. The highlight of the  musical performance will be that it will become the basis of the  Armenian melodies, arranged taking into account modern Christmas  trends.

At the end of the musical, the lights of the main New Year tree  located on Republic Square will light up, and the opening ceremony of  the Christmas market in the park dedicated to the 2750th anniversary  of the capital will be held. The park itself during the New Year  holidays will turn into a venue for daily show programs (concerts,  children's performances, and so on). Particular attention will be  paid to decorating the capital on New Year's days. In particular, the  fountains on Republic Square will be transformed into a modern  fairy-tale city, and an exhibition of delirious New Year trees will  be held on Severny Prospekt. In addition, for reasons of pedestrian  safety, a temporary elevated passage leading to the main Christmas  tree of the republic will be installed on Republic Square.

December 31 at 22:00 on the Republic Square starts the New Year's  festive concert. In the first part, Armenian performers will present  their best works, and the popular duet of Garik Papoyan and Sona  Rubinyan will perform the song "Yerevan 2020" for the first time. At  23:45, Prime Minister of Armenia Nikol Pashinyan will deliver a New  Year's address from the central square of Yerevan, after which a  concert by the world famous musician and composer Goran Bregovich  awaits residents and guests of the capital. Further, the New Year  program will last until dawn.

On Christmas Day, January 5, a children's Christmas performance will  be held in the center of Yerevan. In total, New Year's events in the  capital will last until January 13.