Armenian Prime Minister and President summarized the results of the  year 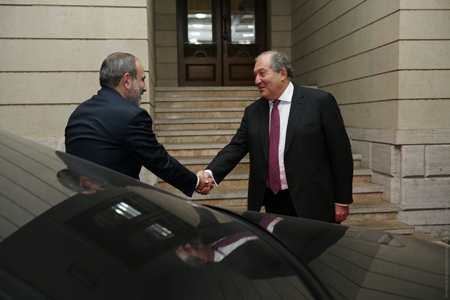 ArmInfo. A working meeting was held between the Prime Minister of Armenia Nikol Pashinyan and President Armen Sarkissian at the residence of the President of Armenia.

As the Prime Minister's press service told ArmInfo, Pashinyan noted  at the meeting that these meetings are regular. "In recent months, I  believe that both you and I have had a rich agenda of meetings, and  it is very important that we share the results of this work with each  other, because I believe that this is an important and urgent issue  for the proper work of government institutions in our country, "the  prime minister said, noting that in the morning he and the president  were in the memorial complex of the victims of the Armenian Genocide  and laid flowers to the eternal flame in connection with the  International Day of Commemoration of the Victims of the Crime of  Genocide, honoring their dignity and preventing this crime, and paid  tribute to the memory of all the victims of this crime.

"We also noted during discussions that the international recognition  of the Armenian Genocide is not only a matter of historical fact and  justice for us, but also our important contribution to the global  policy of preventing genocides. And, of course, we have said before  that we are considering international recognition of the Armenian  Genocide as an important component of the security of Armenia and the  Armenian people.  We talked about this in the past, and today we have  specified our future activities in this direction, "the Prime  Minister of Armenia emphasized.

At the same time, he pointed out the importance of summing up the  results of the past year, in connection with the end of 2019. In this  regard, Pashinyan stated that the state budget for 2020 was discussed  2-3 days ago in the country's parliament and its draft was adopted,  as well as the law on budget, and in his opinion, the year ends with  a fairly positive economic indicators. According to him, this is very  important from the point of view of a more confident entry into next  year.

"Of course, I think that summing up the results of the year, we  should not forget about our omissions and shortcomings, the  difficulties we encountered, which, of course, are inevitable, but  this does not mean that we should not take steps to eliminate and  ensure more effective work. And, of course, you set out your position  on supporting the activities of the government and the National  Assembly. It is very important to note, and I am pleased to note that  there is a very good working atmosphere and good cooperation between  the president, the government and the National Assembly. Of course,  this is a very joyful fact, especially in the logic of the new  constitutional arrangements, and on the other hand, here we pledge to  do everything to make this cooperation more effective ", Pashinyan  assured.

Nikol Pashinyan and Armen Sarkissian discussed issues related to the  current agenda and development programs of the country.