In Feodosia, they began to build an elite residential complex right  at the Armenian cemetery 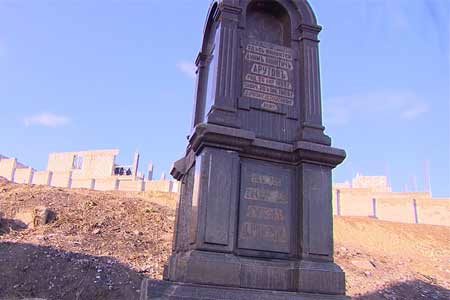 ArmInfo. In Crimea, in Feodosia, they began to build an elite residential complex right at the Armenian cemetery, near which the Armenian church of Surb Gevork  is located. Officials issued permission, and the fact that this is a protected area of a medieval church did not bother anyone, NTV reports.

An elite residential complex began to be built on the territory of  the ancient Armenian burial. At first, no one was embarrassed that  this was a protected area of a medieval church. Officials issued a  permit, builders set to work. But when tombstones of graves appeared  under a bulldozer, the entire Armenian diaspora came out to protect  the memory of their ancestors.

Meanwhile, as RIA-Novosti reports, this autumn two construction  projects started one by one on the squares adjacent to the Armenian  church. The first one began in October and immediately attracted the  attention of local community members: the old masonry of the temple  fence was covered with construction debris. In the last days of  November, another private construction unfolded near the church. The  scandal flared up with renewed vigor and reached its climax when  ancient crypts were laid bare at the work site, coffins and human  remains appeared in the ditches.  What is happening around the temple  caused the anger of the Armenian community.

"How can we relate to our history this way? We will protect this place so that no one does anything here! So you can sell land anywhere. And dig Aivazovsky, and  arrange a construction site on the site of his grave,"  representatives of the Armenian community expressed their  indignation.  According to the head of the Armenian community of  Theodosia Ashot Gaboyan, the fact of the development of the territory  of the temple itself is an act of vandalism.

The fact that as a result of these works the ancient burial grounds are damaged is  blasphemy at all. "We are now dealing with the first construction,  and then people who live nearby call us and tell us that the tractor  is destroying the cemetery.  We arrived and this is happening. Graves  have opened, coffins and remains are visible. This is a historical  temple of the 14th century, and it's blasphemy! They began to destroy  our history with tractors! We are indignant that this will stop and  that the situation will receive a legal assessment, "Gaboyan comments  on the situation.

Meanwhile, local officials explain that back in  the Ukrainian period, land in this place was cut and sold into  private property. As it turned out, the owner applied for the  issuance of a town-planning plan for the land plot as early as this  fall. "According to the documents, the site is owned. It was issued  in 2006.

The owner applied for a GPZU and received it in October of  this year. The document requires prior to any work to be agreed with  the Committee for the Protection of Cultural Heritage. In addition to  this, in November a letter was written to the citizen, so that he  would pay special attention to the conditions of the GPZU. However,  the owner allowed the work.

We wrote to the Committee for the Protection of Heritage Culture with the aim of taking measures within their competence to clarify the procedure associated with the  establishment of conservation zones and the operation of these land  plots. Archeological work may also be justified, "said Igor Sokolov,  head of the municipal control department of the Feodosia  administration.  In turn, the head of the Feodosia administration,  Sergei Bovtunenko, on the official Facebook page, said that he was  keeping the situation under personal control and considered that any  construction work in the specially protected area was unacceptable.  According to him, the owner of the land was notified of the need to  suspend work. At a hardware meeting in the city administration on  December 2, Bovtunenko also touched on this topic: "The decision to  allocate this land was made in 2006.

The situation, of course, is unpleasant. But I would like to remind you that some of the bloggers involved in the discussion of this issue, At that time, we were  deputies and allocated this land. Therefore, let's not talk about who  is to blame.  We have to do business. As for the work of the  Department of Land Relations and the issuance of the GPZU - from now  on, specialists will carefully study the risks new situations. " As  the Feodosian historian and local historian Andrei Evseev, who had  been the head of the city museum of antiquities for many years, told  the RIA Novosti Crimea correspondent that the period of the  construction of the Armenian Catholic Monastery of St. George (Surb  Gevorg) should nevertheless be attributed not to the XIV, but to the  XV century. The temple was built outside the medieval Kafa, within  the boundaries of a suburban Armenian settlement.

"In the XIX century, Gabriel Aivazovsky led the completion of the building. It  was then that the dome appeared, which today crowns the building. Of  course, this is a very valuable monument. As for the cemetery, its  area was not limited to the territory of the temple: the first  burials here also date from the XV, the last - date back to the  beginning of the 20th century, "says the historian.  As clarified in  the press service of the administration of Feodosia, the temple  territory was divided not even into two, but into as many as four  sites, each of which acquired new owners 13 years ago. But the  mechanism for the return of this land still exists and will certainly  be used. "The administration has begun preparing claims for the  return of three plots to the municipality. For the fourth, within  whose borders construction began in October, a different procedure  will be applied, since there are already buildings on this land. A  session of Theodosia city council will be held on December 13, during  which deputies will consider the question of canceling the session  decision of 2006 on the allocation of these land plots.

After that, the lawsuits will be submitted to the court, "explained the head of  the department for public relations and the media administration of  Feodosia Armine Shakaryan.  It seems that the process will be lengthy  and difficult, but there is already a precedent in Feodosia:   similarly, the Theodosians defended one of the city squares, also  sold privately in 2004. In order to speed up the resolution of the  issue, they plan to create a special commission, which will include  officials, lawyers and representatives of the Armenian community.