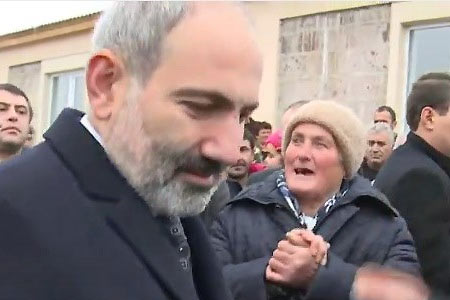 ArmInfo.On the 31st anniversary of the devastating earthquake in Armenia, today -  December 7, 2019, the Prime Minister of Armenia Nikol Pashinyan  visited the Shirakamut community, in the past - Nalband, Lori region  of Armenia to pay tribute to the victims of the earthquake.

On December 7, 1988 at 11 41 a.m. local time, a catastrophic  earthquake occurred in Armenia. A series of tremors in 30 seconds  almost destroyed the city of Spitak and caused severe damage to the  cities of Leninakan (now Gyumri), Kirovakan (now Vanadzor) and  Stepanavan. Altogether, 21 cities and 350 villages suffered from the  disaster (of which 58 were completely destroyed). In the epicenter of  the earthquake - the city of Spitak - its strength reached 10 points  (on a 12-point scale), in Leninakan - 9 points, Kirovakan - 8 points.  The 6-point earthquake zone covered a significant part of the  republic, tremors were felt in Yerevan. According to experts, during  the Spitak earthquake in the rupture zone of the earth's crust,  energy was released equivalent to the explosion of ten atomic bombs,  each of which was similar to the one dropped on Hiroshima in 1945.  The wave caused by the earthquake went around the Earth and was  registered by scientific laboratories in Europe, Asia, America and  Australia. According to official data, an earthquake killed 25  thousand people, 140 thousand became disabled, and 514 thousand  people lost their homes.

The earthquake disabled about 40% of the industrial potential of the  republic. Secondary schools for 210 thousand student places,  kindergartens for 42 thousand places, 416 health facilities, two  theaters, 14 museums, 391 libraries, 42 cinemas, 349 clubs and houses  of culture were destroyed or damaged. It was disabled 600 kilometers  of roads, 10 kilometers of railways, completely or partially  destroyed 230 industrial enterprises.

The whole world rallied to help Armenia. Rescuers came from all over  the world, more than a hundred countries sent humanitarian aid  cargoes. The French chansonnier of Armenian descent Charles Aznavour  created the Aznavour for Armenia fund to raise funds to help his  historic homeland.

In 2021, the Armenian authorities plan to start without the concept  of "beneficiary of the disaster zone In 2020, the authorities plan to  finally solve the housing problem of the homeless families as a  result of the 1988 Spitak earthquake, providing the remaining 453  families with housing and allocating 3 billion drams (more than $  6.27 million) for these purposes.

Recently, the Cabinet of Ministers of Armenia approved a draft  decision on financial assistance to victims of the Spitak earthquake.  This year, 61 families (44 last year) had resolved housing problems.  453 beneficiary families in Lori, Chirac, and Aragatsotna are still  awaiting a housing decision that was supposed to be regulated in  2020. Of the 453 families, 281 live in 27 settlements of the Lori  region of RA, 148 - in 9 settlements of the Shirak region, 24  families in 11 settlements of the Aragatsotn region. To understand  the preferences of the form of support - building houses or providing  a certificate for housing, a study was conducted with the  participation of regional governors and beneficiaries. 227 families  (121 in Lori, 90 families in Shirak and 16 in Aragatsotn) expressed a  desire to get an apartment through a housing certificate. The  beneficiaries of the program will receive apartments subject to the  release of the temporary house and its dismantling. For this purpose,  1 billion 291 million 600 thousand drams will be allocated from the  RA Government Reserve Fund. Of these, 535 million 600 thousand drams  will be allocated to solve the housing problem of 90 families in  rural areas of the Shirak region, 121 families will receive 674  million 800 thousand drams in Lori, 80 million 100 thousand drams  will be allocated to 16 families in Aragatsotn.