Russian historian: For the first time, Armenians raised the issue of  persecution of Avar and Lezghian languages in Azerbaijan 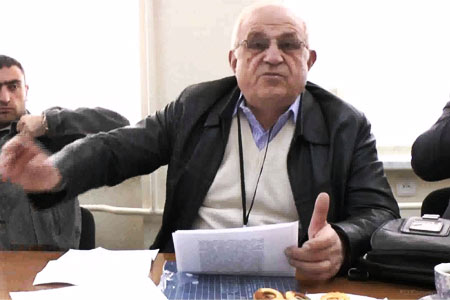 ArmInfo. For the first time, Armenians raised the issue of persecution of Avar and Lezghian languages in Azerbaijan, moreover with a written notice.  Russian  historian Timur Aitberov, speaking at the report "Avars of the South  Caucasus: Problems and Prospects", expressed a similar opinion at the  International Conference on  "The autochthonous peoples of the  Caucasus-Caspian region in the light of scientific realities and  falsifications" held in Yerevan

"These were the Yepiskoposyan spouses who raised a issue related to  the problem of persecuting the languages of the Avar and Lezgi  peoples in the Azerbaijani SSR in the 1950s with CPSU Central  Committee. I want to emphasize that in order to voice such a issue  during the years of Stalin's rule great you need courage and brave mind. We in Dagestan learned about this recently, and we express our gratitude  to your compatriots, "the historian noted.

For the first time, creator of the Armenian alphabet Mesrop Mashtots  thought about the fate of the mountain peoples of the Caucasus and  along with his students and followers created a writing system for  them. According to his estimates, even despite the fact that this  system of wide distribution was not honored, these peoples should be  grateful to Mashtots for attention to their problems.

At the International Conference on  "The autochthonous peoples of the  Caucasus- Caspian region in the light of scientific realities and  falsifications" held in Yerevan on December 6-7, scientists from  Armenia, Iran and Russia speak. In general, in addition to the  representatives of Armenia, about 20 scientists and public figures  from abroad, including representatives of the indigenous population  of the Caucasus-Caspian region, participate in the event. During the  event, speakers and participants discuss the problems of the region's  indigenous peoples in the context of the international situation,  geopolitical realities and cultural transformations.