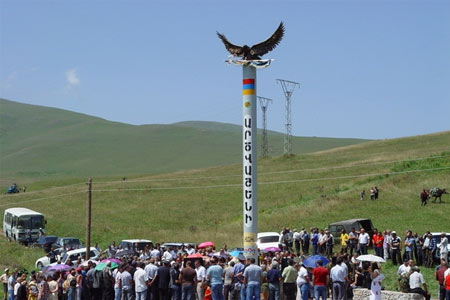 ArmInfo. Former residents of Artsvashen village (the territory of Armenia seized by Azerbaijani forces in August 1992 - Ed.note), who now live in the Gegharkunik  region of the Republic of Armenia, gathered in front of the  government and demand compensation of 6 billion drams from the  government.

Earlier today, at a government meeting, Prime Minister Nikol  Pashinyan stated that he has information that refugees from the  village of Artsvashen are going to hold a protest outside the  government building.  Meanwhile, as Pashinyan pointed out, de jure it  was recorded that the state had fulfilled all its obligations to  refugees. "They say that yes, at one time the government forced them  to sign some documents and thereby close the issue. We understand  this, but what is the reason for the situation that we have today? We  simply decided to allocate 1.2 billion drams for solving specific  problems of refugees (the decision to provide housing certificates to  about 112 families forcibly deported from Azerbaijan in 1988-1992 -  Ed.note), "Pashinyan said.

Meanwhile, residents of Artsvashen claim that they did not receive  compensation for material losses. The chairman of the "Artsvashen and  Sons" Union, Yura Gulyan, recalled that in 2009 the government  decided to compensate for the damage, promised to allocate six  billion drams, in 2011, 708 million were given out, which were used  by 2,000 people, each got about 360 thousand drams.

The protesters met with the head of the Department for Reception of  Citizens and Discussion of Petitions Alexander Ghazaryan. Later they  said they were unhappy with the results of the meeting. "As a matter  of fact, it was said that the problem of residents of Artsvashen  village is not a priority, however, it is in the queue. The Prime  Minister is aware of our problem and asked to convey that over time  the problem will be resolved," Yura Gulyan said.

To recall, on September 20, 2018, about 500 residents of Artsvashen  village held a protest in front of the government building demanding  to allocate funds for them to restore the housing stock of the  settlement, which, they said, was in a deplorable state. On the same  day, Pashinyan went to the protesters and agreed to meet on October  2. As the Prime Minister's press service reported then, the  protesters told Pashinyan that since 1992, in order to improve their  living conditions, they have been compensated three times.  - 2 times  50 mln drams each and once - 708 mln drams. In general, as they  noted, by the decisions of the government of previous years,  compensation was provided in the amount of 1 million drams to each  family, part of which has already been paid. Today, internally  displaced persons wish to discuss with the new government the amount  of further financial assistance.

It should be noted that on August 8, 1992, after stubborn battles it  was decided to surrender the village of Artsvashen, blocked by  Azerbaijani forces, to the enemy. Artsvashen people were given  shelter mainly in the town of Chambarak (former Molokan Krasnoselsk -  Ed. note) where once the Molokans lived. Today, most residents of  Artsvashen have serious housing problems - their houses rot and  collapse.