Prime Minister: I have been accused in lobbying for the interests of  a company related to Serzh Sargsyan 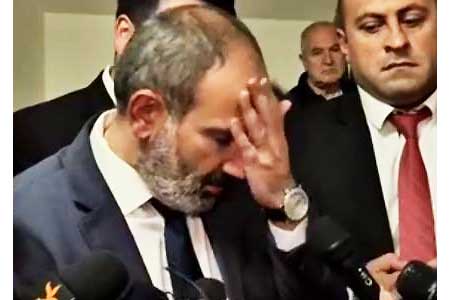 ArmInfo.Prime Minister Nikol Pashinyan has been accused in lobbying for the interests of the company related to with Serzh Sargsyan. The head of government stated  this on December 5 at a cabinet meeting.

So, after his record of the need to get rid of rusty and unnecessary  scrap metal, he received a very interesting response. "They say that  you are actually forcing people to gave metal for pennies to a  company related to with Serzh Sargsyan. "This is when this abandoned  metal rusts there, does not bring any benefits.  When children rise  and fall on it, spoils their aesthetic taste, "the prime minister  noted.

And here, he said, an internal political conspiracy is again emerging  that "virtually the entire revolution was for these iron bodies to  serve the interests of the former corrupt regime." Now they also want  to put networks from below, "Pashinyan said laughing, emphasizing  that this is not a economic, but a civilizational issue.  Armenian  Economy Minister Tigran Khachatryan, in turn, said that over the past  2 months, about 3600 tons of scrap metal have been collected by  private organizations. At the same time, as he pointed out, today  there is a problem related to the unwillingness of citizens even to  rent old, abandoned cars for money. As the minister pointed out, the  government at this stage is considering how to make them surrender

To recall, on November 26, Nikol Pashinyan on his page on Facebook  called on citizens to clear the republic of metal debris. So,  according to Pashinyan, over 11 thousand old cars have been collected  in Armenia over the past two months. "We will cleanse Armenia of  garbage," he wrote.

It should be noted that Armenia has become a kind of "graveyard" of  old cars, since from 2015 to 2020, the customs duty on cars in  Armenia remained at 10%, regardless of the age and volume of the  engine. From January 1, 2020, duties on cars imported into Armenia  from countries that are not members of the EAEU will correspond to  the common customs duties of the Union. As a result, the cost of  customs clearance of a car, especially for used cars, which are now  being bought at a low price and imported into the country in very  large quantities, will increase significantly. In this regard, many  are trying to manage to take advantage of the "window" of the EAEU  and make money on it. As the head of the State Revenue Committee  David Ananyan stated earlier, from 2020, after the entry into force  of the EAEU regulations, budget revenues in this sector alone will  decrease by 50-52 billion drams. How much does it cost to recycle  metal trash from old cars, officials are silent.