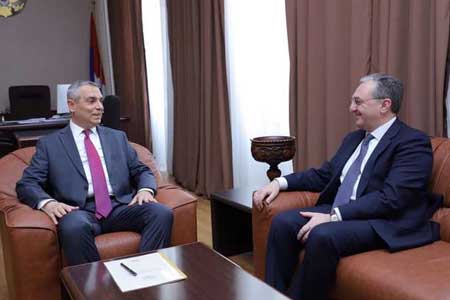 ArmInfo.On December 3, RA Foreign Minister Zohrab Mnatsakanyan met with NKR Foreign Minister Masis Mayilyan. During the meeting, the expectations and priorities of Armenia and Artsakh were discussed in detail within the framework of the  Bratislava conference under the auspices of the co-chairs of the OSCE  Minsk Group.

The Armenian Foreign Minister emphasized the importance of holding  regular meetings in this format, noting that this provides a good  opportunity to exchange detailed thoughts on the steps and prospects  for a peaceful settlement of the Nagorno-Karabakh conflict. In the  framework of fulfilling the obligation to prepare peoples for peace,  an exchange program was conducted between the media of Armenia,  Azerbaijan and Artsakh.

Armenian Foreign Minister confirmed the need to implement ceasefire  agreements to prevent incidents on the Line of Contact.

Both sides emphasized the need for the full participation of  authorities using the mandate of the people of Artsakh in the peace  process, especially on substantive issues of settlement.

To recall, the Armenian Foreign Minister presented the agenda of the  upcoming meeting with his Azerbaijani counterpart Elmar Mammadyarov  on December 4 in Bratislava. According to him, the upcoming meeting  will discuss a range of issues of Karabakh settlement. "There is a  single package of issues regarding the settlement and the atmosphere  in which this process takes place.  All of this in combination is  important. Our position is known. Our priorities are the security of  Nagorno-Karabakh and its status," Mnatsakanyan emphasized. The  Armenian Foreign Minister also pointed out the importance of  introducing confidence-building mechanisms and measures to reduce  escalation risks.