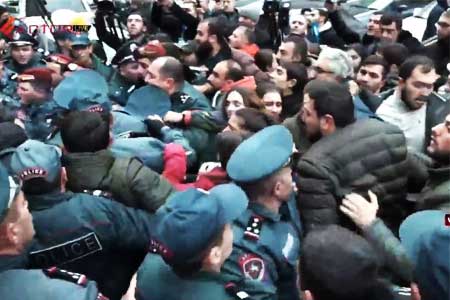 The situation escalated after protesters broke through the police  cordon and tried to break into the ministry building to meet with the  minister.

To note, the ARF youth movement demands the resignation of the  Minister of Education, Science, Culture and Sports Arayik  Harutyunyan, arguing that the ministry took the legislative  initiative to make the teaching of the subjects "Armenian language",  "Armenian literature" and "Armenian history" optional, giving the  universities the right to themselves make decision on their teaching.

The question escalated after the "Scandalous" performance "Excitement  and Bell" held in front of the "Republic Square" metro station when  it turned out that the Ministry of Education, Science, Culture and  Sports allocated a grant in the amount of 2.7 million drams (5  thousand US dollars) for the performance.

Another reason for criticism was the partial funding by the  government of a documentary film about the former member of the  Armenian women's weightlifting team Meline Daluzyan, who, after  emigrating to the Netherlands, changed her gender, becoming Mel  Daluzyan.