Nikol Pashinyan: Government`s task is to create conditions for people  with disabilities to reveal and develop their talent 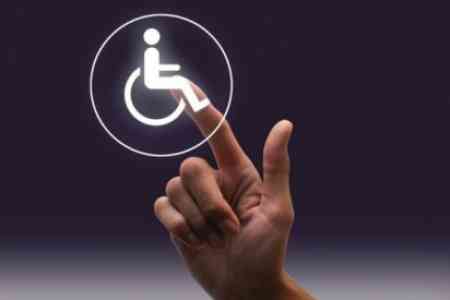 ArmInfo. Armenian Prime Minister Nikol Pashinyan held a meeting on December 3 dedicated to the problems of people with disabilities.

According to the press service of the Government of Armenia, in his  speech, the Prime Minister noted that December 3 is the International  Day of People with Disabilities, which was established by the UN and  has been celebrated since 1992. "This year's motto is to promote the  participation of people with disabilities in the implementation of  the development agenda for the period until 2030. There are 189,485  disabled people in Armenia, of which more than 8,000 are children. It  is important that the public opinion and perception of people with  disabilities in Armenia is changed in general, because in many cases  a key component of attitudes towards people with disabilities is a  sense of compassion, which, like in many other cases, is the wrong  formula. The matter concerns not only advantages and opportunities,  we have to treat people with disabilities, not as a burden in the  life of state and society, but as a great potential and great  opportunities ", stressed the head of government. He noted that today  among people with disabilities there are talented scientists,  writers, artists, businessmen. Therefore, the political task is to  create the conditions for these people to discover, develop and  realize their talent.  Then, Minister of Labor and Social Affairs  Zaruhi Batoyan said that the process of introducing a new system for  assessing disability and providing services is currently underway. A  new model and a package of legislative initiatives are presented for  interagency discussions to clarify the area of responsibility.   According to the minister, the work undertaken and the government's  steps were aimed at ensuring that the state policy regarding the  rights of people with disabilities, instead of relying on the medical  model, becomes socio-legal and reduces local corruption risks.  The  new document sets out the basic principles and directions of state  policy, which are fully consistent with international treaties  ratified by Armenia. The bill will eliminate discrimination based on  disability. If the document is adopted, state and local  self-government bodies, organizations, regardless of their legal  form, will be required to provide people with disabilities with  access to information, communications, including access to  residential, public, industrial and other buildings and structures,  transport, recreation and leisure. The bill will prohibit the  construction of residential buildings without creating infrastructure  for people with disabilities.  Then an exchange of views took place,  which showed that in Armenia there are now many buildings that are  not adjusted for people with disabilities and not accessible to them.  The Minister noted that according to a government decision of 2007,  every building in Armenia should have the necessary conditions for  people with disabilities, but in many cases this requirement has not  been met.

The Prime Minister instructed the responsible persons to investigate  such cases and determine the circle of officials who made the  appropriate decision for further legal assessment. At the same time,  Nikol Pashinyan gave an order to exclude such cases, so that all  newly constructed buildings and structures had accessible conditions  for the disabled.  Summing up the consultation, the Prime Minister  noted that the country can achieve a serious level of development if  its full potential is used. That is why special attention is paid to  the involvement of women and people with disabilities in various  programs. The head of government recalled the jewelry factory that  opened in Abovyan the day before, which has a special section for  people with disabilities, which is very important because poverty can  be overcome only through work. For people with disabilities, only  through work can disability be overcome. "It's another matter that in  the first and second cases, the state and the government must create  real conditions for these people to be able to get jobs, create jobs,  and this is our understanding," the Prime Minister concluded.