The desecration of the monument to Griboedov in Yerevan: A worthy  answer for Nzhdeh or the voiced slap in the face of the Armenian  people? 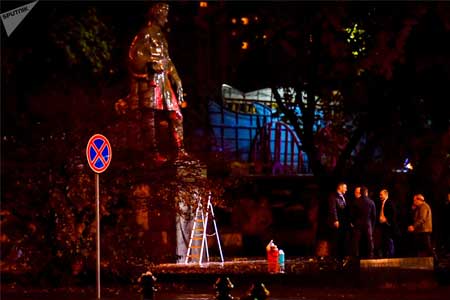 ArmInfo. The Russian Embassy in Armenia issued a statement in connection with the  desecration of the monument to Alexander Griboedov in Yerevan.

So, in a statement circulated by the embassy, in particular, it is noted:  "We share the position of official Yerevan, which gave an extremely  clear description of this ugly act regarding the monument to A.S.   Griboedov, a great friend of the Armenian people. We believe that the  unanimous condemnation of this trick by the Armenian public testifies  to the strength fraternal, allied relations between Russia and  Armenia, having deep historical roots."

On the eve, the son of the chairman of the Tsekhakron party Shant  Harutyunyan, Shagen Harutyunyan, posted a photo on his Facebook page  a monument to Russian writer Alexander Griboedov in Yerevan, which  shows that the monument is drenched in red paint. "Attention. I just  painted a monument to the ambassador of the Russian Empire, the  writer Griboedov in response to the coloring of the memorial plaque  of Garegin Nzhdeh," wrote proudly Shant Harutyunyan, not realizing  that in this way he was likened to being the same as a deputy of the  Armavir City Council who had defiled the day before commemorative  plaque to Garegin Nzhdeh.

Shant Harutyunyan apparently at that moment did not realize that  taking out evil on the monument of a great friend of the Armenian  people, he does not triumph over justice, but denigrates the whole  people, as in the famous saying "When you throw dirt at a person,  remember - it may not reach it, but it will remain in your hands. "  For the sake of fairness, it should also be noted that this act of  this individual was criticized by wide public circles in Armenia. The  unacceptability of such actions was indicated especially in relation  to the monument to the great friend of Armenia Alexander Griboedov,  who sacrificed his life to save the Armenians. Many even noted that  this was not a slap in the face to Russia, but to the entire Armenian  people.

It is also worth noting that the Yerevan Municipality has already  been informed that the monument to Alexander Griboedov in Yerevan  that has been painted over has been cleaned. "Since I'm not in  Armenia, I skipped this incident. But since the Central  Administrative Region of Yerevan already has a new leader, the  decision was not late," wrote Hovsep Kubatyan, head of the Yerevan  Municipality Information and Public Relations Department, on his  Facebook page. the Armenian Police informed, in fact, materials are  being prepared.

A spokesman for the Prime Minister of Armenia Vladimir Karapetyan,  commenting on the incident related to the desecration of the monument  to Griboedov in Yerevan in an interview with the state agency  "Armenpress" in particular, said: "We condemn the incident. Such  manifestations of vandalism should not take place in our society. The  police are investigating , the public will know about its results in  the near future. "

In turn, the deputy of the National Assembly of Armenia Alexei  Sandykov wrote on his Facebook page that the trick of the  radically-minded pseudo-patriot does not fit into any logical  framework. "As a parliamentarian, I personally will ensure that the  perpetrator of the act of vandalism is punished to the fullest extent  of the law. In the same way, through our diplomatic channels, we will  follow the development of the events of the act of vandalism in the  Russian city of Armavir. These provocative acts try to cast a shadow  on dynamically developing Russian-Armenian relations and should be  stopped in the bud, "the Armenian parliamentarian wrote.

It should be noted that in honor of this great Russian diplomat and  writer, a monument was erected in the center of Yerevan (architect  Bejenyan, 1974). The high bronze figure of Griboedov on a relatively  small granite pedestal only emphasizes the greatness of the writer,  and the inscription "To Alexander Griboedov from the grateful  Armenian people" is stamped on the pedestal. It was he who was  desecrated yesterday.  It is worth recalling that A.S. Griboedov was  a great friend of the Armenian people. As the Russian ambassador to  Persia, during the signing of the Turkmenchay Treaty in 1828, he  obtained permission for the first repatriation of Armenians. With the  help of Griboedov, 40,000 Armenians returned to their homeland. We  also note that the first production of the immortal comedy of the  great Russian writer Griboedov "Woe from Wit" was carried out in  Yerevan. During the Russian-Persian war of 1826-1828.  Russian troops  under the command of General Paskevich took the Erivan fortress on  October 1, 1827, while Griboedov took part in these events and was  even awarded the medal "For the capture of Erivani".  And then the  play actually premiered, and in the presence of the author himself.  Today, this is evidenced by the inscription on the outer wall of the  wine-vodka-brandy factory, located on the site of the former Erivan  fortress.