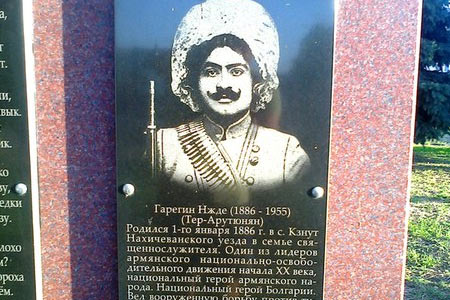 ArmInfo. The memorial plaque of Nzhdeh, installed in the Russian city of Armavir, has been dismantled. This was reported by archpriest Ter Makar Terteryan.

This information was also confirmed by the deputy of the Armavir City  Council Alexei Vinogradov, who had previously staged an act of  vandalism by painting a commemorative plaque installed on the  territory of the Armenian temple in Armavir.

As ArmInfo previously reported, an act of vandalism was recorded on  the territory of the Armenian temple in Russian Armavir on November  12, in particular, the deputy of the Armavir City Council Alexey  Vinogradov entered the temple territory and painted black the  memorial plate to the National Hero of Armenia Garegin Nzhdeh. In  connection with the incident, a statement was made by the Armenian  Embassy in the Russian Federation, which emphasizes the  unacceptability of such actions, which do not correspond to the  spirit of Russian-Armenian allied relations.

As Vinogradov explained to the Russian media, he resorted to this  step, since on November 11, a two-week period had passed, during  which the regional and local authorities, as well as representatives  of the local branch of the Union of Armenians of Russia, promised to  dismantle Nzhdeh's memorial plaque. Earlier, deputy Vinogradov has  repeatedly stated that in case of failure to fulfill promises to  dismantle the board, he will independently resolve this issue.

Recall that earlier the Chairman of the State Duma Committee on CIS  Affairs, Eurasian Integration and Relations with Compatriots Leonid  Kalashnikov promised to make efforts to dismantle the memorial plaque  to Garegin Nzhdeh in Russian Armavir. He stated this in an interview  with one of the Azerbaijani media. "I intend to deal with this issue  personally. I will personally send inquiries and I will seek  dismantling. We will fight, we will deal!" Kalashnikov noted.

At the same time, representatives of the Azerbaijani community of  Russia requested the Armavir City Hall (Krasnodar Territory) to  dismantle the memorial plate in honor of Garegin Ter-Harutyunyan  (Nzhdeh), installed in 2012 on the territory of the Armenian Church  of the Assumption of the Blessed Virgin Mary, on the initiative of  the Armavir branch of the Union of Armenians of Russia. The small  plate installed in Armavir in honor of Nzhdeh symbolizes the Armenian  national spirit. In addition to Nzhdeh, the sculptural structure  depicts Andranik Ozanyan (1865? 1927) - an associate of Nzhdeh, the  national hero of Armenia, the general of the Russian Empire, the  leader of the Armenian liberation movement in the Ottoman Empire and  in Transcaucasia during the Civil War in Russia.

This issue escalated after a verbal skirmish that arose between  Azerbaijani President Ilham Aliyev and Armenian Prime Minister Nikol  Pashinyan in Ashgabat because of Nzhdeh.

ArmInfo. The Russian State Duma condemned the act of vandalism on the memorial plaque of the hero of Armenia in Armavir.

A Group of citizens holds a protest in front of Russian Embassy in  Armenia due to an act of vandalism in Armavir
Friday, November 15 2019 14:09

ArmInfo.  A group of  citizens holds a protest in front of the Russian Embassy in Armenia  due to an act of vandalism took place a few days earlier in the  territory of the Armenian church in Russian Armavir.

Zakharova: Investigative bodies of the Russian Federation have begun  proceedings in connection with the incident on the territory of the  Armenian church in Armavir
Thursday, November 14 2019 18:29

ArmInfo. Immediately after receiving information about the incident on the territory of the Armenian church in Armavir, the investigative authorities of the  Russian Federation began the investigation. This was announced on  November 14 during a weekly briefing by the official representative  of the Russian Foreign Ministry, Maria Zakharova, when answering a  question about an act of vandalism in the territory of the Armenian  church.