Aliyev sees Garegin Nzhdeh even in his dreams 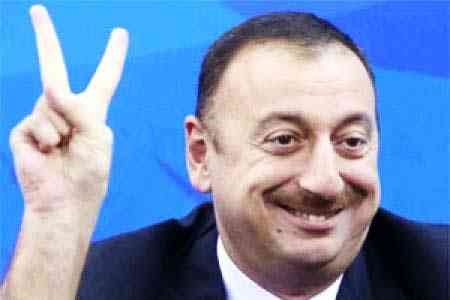 ArmInfo. Azerbaijani President Ilham Aliyev has decided to plead with his citizens to  participate in the discussions of the Valdai International Club in  Sochi.

So, during his speech at the ceremony on the occasion of the  100th anniversary of Baku State University, Aliyev recalled that he  took part in the discussions at the invitation of Russian President  Vladimir Putin.  "There were invited only 3 heads of state, including  Azerbaijan. This once again testifies to the great importance Russia  and its president attach to Azerbaijan, and with what respect they  treat us. And there I said live: "Karabakh is Azerbaijan, and an  exclamation mark." The whole world once again saw that Karabakh  belongs to Azerbaijan, the whole world once again recognized this  truth, "Aliyev said.  The president of dynastic Azerbaijan did not  calm down on this and decided to reiterate the issue related to the  Armenian national hero Garegin Nzhdeh, apparently deep down in  jealousy that official Baku cannot boast of world-famous Azerbaijani  heroes to the whole world.

"In Ashgabat, at the CIS summit, I said that a 6-meter monument was  erected to the fascist Garegin Nzhdeh in Armenia, it must be  demolished, this is unacceptable. He said that he was an accomplice  to the fascist and at that time he was arrested and rotted in prison.  This says that the power in Armenia can change, but the fascist  essence of this country does not change. I gave them a chance. In my  speech I said that it was established by the previous government. If  the current government calls itself democratic, then let it demolish,  destroy this monument. Let this stain be washed off from Armenia. No,  look In fact, their fascist essence reached the point that they claim  that he fought with the Turks. That is, it is important for them.   They raise children in a spirit of hatred towards us, Turkey, and  Muslims, "the Azerbaijani leader said, hanging on students' ears are  another political noodle, turning over the facts and continuing,  thereby falsifying the story.

At the same time, he admitted in his hearts that Azerbaijan is  jealous of the interaction of a number of Muslim countries with  Armenia. "We have repeatedly held events related to Islamic  solidarity, set out our position. We will continue this, and the  monument to the fascist Nzhdeh is on the agenda. Let some Muslim  countries that have established relations with this criminal state,  doing this and opening their arms to the Nazis, at least present  these destroyed mosques will ask themselves: who am I hugging with ?!  "said President Ar.  He also touched on the statement of the Prime  Minister of Armenia at the Ashgabat Summit, assuring that the latter  made a big mistake by comparing Solzhenitsyn with the fascist.