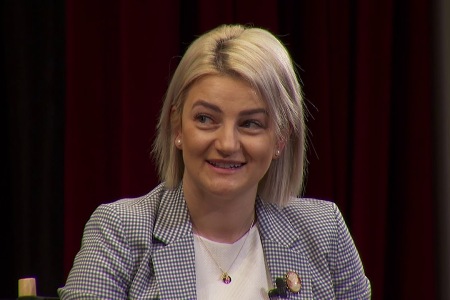 ArmInfo. Arevik Anapiosyan, Deputy Minister of Education, Science, Culture and Sports of the Republic of Armenia, received the delegation of Indonesia on November  25, which arrived in Armenia at the invitation of the Foundation for  Armenian Science and Technology (FAST) to study Armenia's experience  in the field of "Co- incubation and incubator." According to the  press service of the ministry, the delegation of Indonesia, which has  been in Armenia since November 23, consists of representatives of the  government, incubators of enterprises and start-ups.

Anapiosyan noted that bilateral cooperation is carried out within the  framework of the agreement signed in July between the Ministry of  Education, Science, Culture and Sports of the Republic of Armenia and  the Ministry of Research, Technology and Higher Education of  Indonesia. She briefly presented the process and goals of the reforms  in the field of education and science in Armenia, noting that the  task is to deepen the teaching of natural sciences, create favorable  conditions for the continuous development of start-ups, and connect  science and research with higher education institutions. The deputy  minister also touched on the process of revising the state standard  of general education and programs, spoke about the importance of  cultural programs for students.

Armen Orujyan, Founding CEO at Foundation for Armenian Science and  Technology (FAST), announced that FAST, as a key implementing  partner, has already launched the first phase of cooperation.  He  emphasized that in a rapidly changing world, it is necessary to  revise the plans and documents of the educational strategy at least  once every six years.

The representative of the Ministry of Research, Technology and Higher  Education of the Republic of Indonesia, in turn, thanked for the  hospitality and asked about the feasibility of combining the Ministry  of Education and Science with the departments coordinating the  spheres of culture and sports. He also spoke about the cooperation of  higher education institutions with the private sector and the  importance of implementing joint programs.

The delegation of Indonesia will continue the series of meetings  until 2 December.