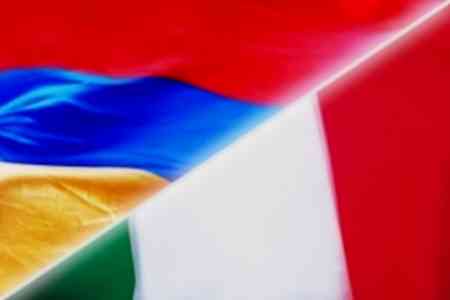 Making a statement to the press on November 22, the Prime Minister  noted that these productive negotiations once again confirmed the  high level of Armenian-Italian relations, as well as mutual readiness  to give new impetus to their development. It was noted that Armenia  appreciates the adoption in April of this year by the Italian Chamber  of Deputies of a resolution calling on the government to officially  recognize the Armenian Genocide. "By this step, the Italian side  reaffirmed its commitment to universal values, thereby contributing  to the prevention of such crimes," Pashinyan said. According to him,  during the talks, special attention was paid to trade and economic  relations between the two countries. "I should note with satisfaction  that tangible dynamics have been recorded in this area this year. At  the moment, Italy is our second trade and economic partner in the EU,  and there are all the necessary prerequisites for giving these  relations a new impetus", the Prime Minister emphasized. During the  meeting, the work of the Armenian-Italian intergovernmental  commission was highly appreciated, and the possibilities of holding a  meeting of the Commission in Yerevan were discussed. Issues of  promoting tourism development were also raised, and the fact that  Ryanair airline will launch direct flights from Yerevan to Rome and  Milan from January 2020 was positively assessed. Mutual readiness to  protect the cultural heritage of both states was also noted.

The Prime Minister also voiced a wish that Italy be more actively  involved in the educational system of Armenia.

"I appreciate Italy's assistance in developing the Armenia-EU  partnership and in starting negotiations on visa facilitation," he  added. Pashinyan presented to Conte the current stage of the Karabakh  settlement, reaffirming Armenia's readiness to continue working in  the format of the OSCE Minsk Group towards a peaceful resolution of  the problem.

The parties also touched upon the implementation of the peacekeeping  mission in Lebanon by the Armenian peacekeepers, exchanged views on  the crisis in Syria, expressed concern about the military progress of  the Turkish armed forces in the direction of the northeastern  regions.