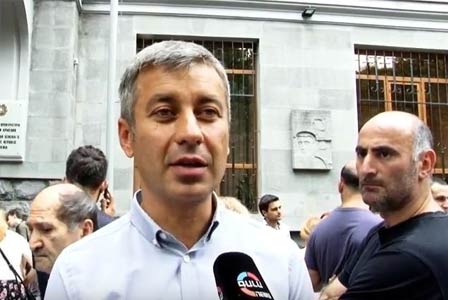 ArmInfo. Spokesman for the Prime Minister of Armenia Vladimir Karapetyan commented on the incident with the Azerbaijani video blogger at the meeting of Nikol  Pashinyan with the Armenian community in Milan.

According to him, the meeting took place in the church, respectively,  the entrance was free for everyone.  This person, as Karapetyan  noted, tried to voice the issue as loudly as possible, and the Prime  Minister gave him this opportunity. "The prime minister eagerly and  thoroughly answered this question. I don't see any problem here," he  said.

According to Vladimir Karapetyan, the Azerbaijani was at a sufficient  distance from the prime minister and, according to the spokesman,  there were no threats from him at that time. "The situation was under  control," he pointed out.

When asked if the security services were to blame, Karapetyan noted  that although he was not an expert in this matter, he did not see  omissions in terms of ensuring the safety of the head of the Cabinet.   He also refrained from answering whether the prime minister's  security would be enhanced.

Armenian Prime Minister Nikol Pashinyan, who is on an official visit  to Italy, met with representatives of the Armenian community on  November 20 in Milan and answered a number of questions. A certain  Azerbaijani Ata Abdullayev, who called himself a video blogger,  interrupted the briefing: "The whole world recognized the "genocide"  of Azerbaijanis by the Armenians, when does it stop? Stop this war,  we do not need a war, free our lands, Mr. Minister, so I can see my  Khojaly, my Shushi . I want peace, when will peace be? "he said.

It should be noted that the identity of a certain video blogger Ata  Abdullaev is being discussed in the Armenian segment of social  networks. Various versions are put forward taking into account the  photographs in which he is depicted with Azerbaijani President Ilham  Aliyev or is actively involved in dispersing anti-government  demonstrations in Baku. It is noted that at one time he actively  collaborated with the special services of his country, and now he is  working for the government. His track record is not limited to this;  Abdullaev was previously tried on charges of fraud.