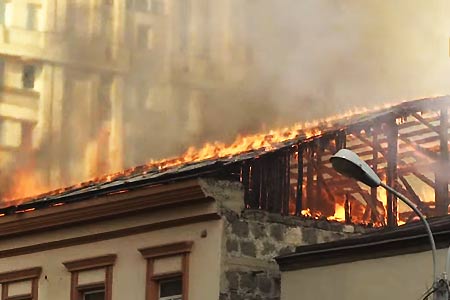 ArmInfo.On November 21 afternoons, a fire broke out in a building located in the center of Yerevan.

According to the press service of the Ministry of Emergencies, at  1:46pm the service <911> received a alarm that the roof of a  two-story building located at the intersection of Abovyan and Pushkin  streets is on fire. We add that until the spring of this year in this  building there was a cafe-restaurant "Provence".

Four combat crews of fire rescuers and operational teams of the  national crisis management center were sent to the scene.

The fire was assigned the third category of complexity, in connection  with which another 6 combat crews and two fire ladders were sent to  the place of emergency.

Reportedly, wooden partitions on the roof of the building  are on fire.