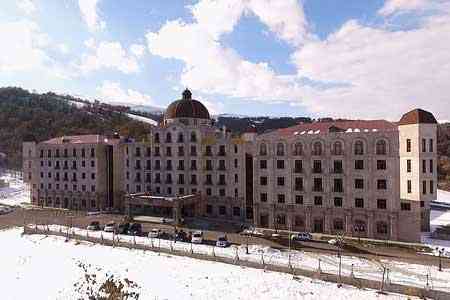 ArmInfo. Hotel "Golden Palace" in Tsaghkadzor tentatively on December 15 will be exhibited at auction bidding. The decision on this was made at a meeting of the  RA Government.

According to the Deputy Minister of Territorial Administration and  Infrastructures of the Republic of Armenia Bagrat Badalyan, the total  area of the hotel itself, located in the resort town of Tsaghkadzor  on 34/1 Tandzakhpur Street, is 19705 sq.m. Another 1.8 hectares are  reserved for utility rooms. As of November 20 this year the cost of  the complex is 7.5 billion drams, and the cadastral value of utility  rooms is 62.4 million drams. The hotel will be put up for auction as  a single complex with a prerequisite for maintaining its profile. The  starting price during the first auction will be equal to 100% of the  estimated value - 7.5 billion drams, and during the second and  subsequent auctions this value will decrease by 5%.  After a  government decision is made, an auction will be announced within two  days, after which another two to three weeks will be spent on  organizing it and receiving applications from participants. Thus,  tentatively, the auction will be held on December 15.

Recall that the hotel complex belonged to the former head of the  Armenian Customs Committee Armen Avetisyan, against whom a criminal  case was instituted in November 2018. According to the investigation,  Avetisyan built hotels for illegal proceeds, and designed them for  fictitious foreign investors for cover.  After the opening of the  case, Avetisyan agreed to transfer one of the hotels to the state.