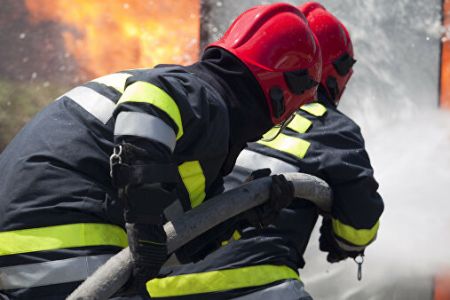 ArmInfo.On November 20, a  ceremony was held in Yerevan to hand over new combat clothing to the  fire service of the Ministry of Emergencies of Armenia. The event was  organized jointly with the UNDP Office in Armenia and the RA Ministry  of Nature Protection. This project was funded by the Russian side in  the framework of the program "Mitigation of the consequences of  climate change in Armenia through the development of forest and field  fire management potentials".

As the Minister of Nature Protection Erik Grigoryan noted, the  program previously provided technical assistance, including in the  acquisition of fire engines. He noted that in the last year an  unprecedented increase in forest fires was recorded in the country,  for the suppression of which technical equipment provided by the  program was also used.

"The implementation in Armenia of projects promoting the  socio-economic field is one of the elements of our diverse  interaction. In this regard, we work closely with international  organizations, and UNDP is one of our key partners", Ambassador  Sergey Kopyrkin informed.

In cooperation with UNDP, Russia is implementing various projects,  and one of them is a project to strengthen the capacity to combat  forest fires. <In the framework of the Russia-UNDP Trust Fund, $ 1  million was allocated for these purposes. In 2017, Russia assisted in  extinguishing fires in the Khosrov Reserve, and the first batch of  fire-fighting equipment was transferred last year, "he emphasized.

"Until the end of the year, within the framework of the project, we  plan to provide additional cars, thereby completing the planned set  of measures," said UNDP Resident Representative in Armenia Dmitry  Maryasin. He drew attention to the fact that in August of this year,  with the help of satellite equipment, 79 thousand forest fires were  detected in the world, while last year - 16 thousand. "In this  regard, it is necessary to be very careful not only to extinguishing,  but also in preventing fires",  he said.