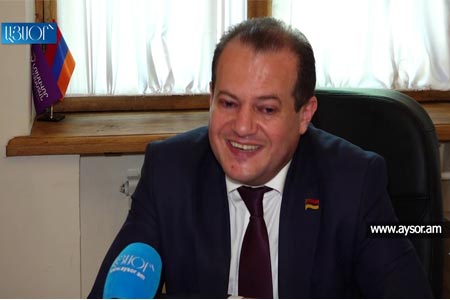 ArmInfo.Member of the Enlightened Armenia faction Arkadi Khachatryan commented on a recent statement by RA Prime Minister Nikol Pashinyan that the party is  opposed to raising salaries in the country.

The prime minister justified this by the fact that the opposition forces intend to use  obscure terminology in their criticism of the budget for 2020, the  meaning of which, meanwhile, comes down to the idea of refusing to  increase salaries, pensions and benefits.  <Accusations that  <Enlightened Armenia> is against raising salaries do not correspond  to the true state of affairs. So, the proposal to raise the minimum  wage came from our side. One of our principled approaches is that  public sector employees should receive high salaries>, Khachatryan  said during a November 20 briefing.

He noted that in the political arena a culture should be formed not  only of working with each other, but also of adopting constructive  criticism. <We say that there are legislative violations in the draft  budget, and we must either amend it or the law <On the budget  system>. There is no other way. It is wrong to blame us for what does  not correspond to the true state of affairs. On the contrary, it  would be more correct if the Government would be grateful to the  opposition forces for their constructive criticism and proposals>,  the deputy emphasized. Khachatryan also noted that the budget has  some good sides. <There is significant progress - qualitative and  quantitative. The other day we sent a new package of proposals on the  budget, and the Government promised to discuss these issues>, he  said. It should be noted that the nominal GDP of Armenia in 2020,  according to the draft budget for next year, will increase by  approximately 529 billion drams - from 6.566.5 billion drams expected  by the end of 2019 to 7.095.1 billion drams included in the document.  As expected, the real GDP index will reach 104.9%, against the  forecasted by the end of the current year of 106.3% and the actual  for 2018 of 105.2%. The GDP deflator will be 103%, against 102.9% for  2019 and the actual 102.5% for 2018. Thus, according to the document,  the state budget revenue item will be 1,697,618,538.8 thousand drams  (1.69 trillion drams or $ 3,566 billion), the expenditure one -  1,880,186,389.8 thousand drams (1,88 trillion drams or about $ 3.95  billion). State-owned tax revenues (tax revenues and state duties)  are projected at 1.602.129.712.8 thousand drams (1.60 trillion drams  or 94.4% of the projected budget revenues) instead of the planned  budget for 2019 1,401,875,600.6 thousand drams, and official grants  are expected to be 33 , 8 billion drams (against 39.5 billion drams  for 2019), other incomes - 61.7 billion drams (against 55.1 billion  drams approved for the current year).