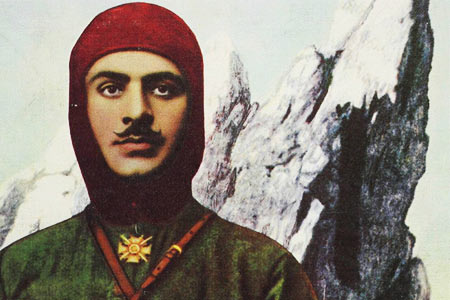 ArmInfo. Armenian Prime Minister Nikol Pashinyan stated that he had never discussed with the Russian authorities the status of the Armenian politician, the hero  of the national liberation movement of the early 20th century,  Garegin Ter-Harutyunyan (Nzhdeh).

Garegin Nzhdeh - a politician and hero of Armenia, one of the  creators of the concept of a national Armenian state. At the  beginning of the twentieth century, he fought against the Turkish  occupation as part of the Bulgarian army during the Balkan War, and  during the First World War as part of the Russian army.  For which he  was awarded numerous orders. During the Second World War, when there  was a threat of Turkish invasion of Soviet Armenia, Garegin Nzhdeh  established ties with Nazi Germany. For this, he was convicted in the  USSR and died in prison in 1955. The name of Garegin Nzhdeh was  voiced in the Russian media last week after the deputy of the city  duma of Armavir (Krasnodar Territory) Alexei Vinogradov painted black  on the plaque in honor of the politician. "The erection of monuments  to those who have become soiled in cooperation with the Third Reich  is an insult to the people who fought against the Nazi invaders. If  Garegin Nzhdeh is a hero, then who are those who erect memorial  plaques for him?" he declared. At the Armenian Embassy in the Russian  Federation, the deputy's act was condemned and regarded as an "act of  vandalism".

Answering the proposal of one of the Russian journalists to create a  commission between the Russian Federation and Armenia to study the  figure of Garegin Nzhdeh, Nikol Pashinyan said that this does not  make sense. "For us, Garegin Nzhdeh and Ivan Baghramyan (Marshal of  the Soviet Union.- Kommersant) have the same sources as historical  figures. They fought for Armenia, for Armenians," said the head of  the Armenian government. At the same time, Prime Minister Pashinyan  compared Garegin Nzhdeh with the Soviet political leader, foreign  minister Vyacheslav Molotov, who signed the German-Soviet treaty "On  Friendship and Border" in 1939. "They say a lot now that Garegin  Nzhdeh had some kind of communication with the Third Reich. And what,  Vyacheslav Molotov did not have communication with representatives of  the Third Reich, "Nikol Pashinyan reminded." Let's create a joint  commission and study what happened there. " Someone in Russia  discussed these figures? If you start, so let's start with Molotov.   What did he do? What for? What have you agreed on? If you want to put  an equal sign between those who spoke with the Nazis, then let's.  Let's start with Molotov. "

The question of the attitude of Yerevan towards Garegin Nzhdeh is  periodically raised by the Azerbaijani authorities. So, in October  2019, this was announced at the CIS summit by Azerbaijani President  Ilham Aliyev. He accused Armenia of the heroization of Garegin Nzhdeh  and called for the demolition of the monument to him in Yerevan.  Nikol Pashinyan then answered: "The truth is that Garegin Nzhdeh  fought against the Turkish occupation! And in 1918, together with the  Soviet (in fact, Soviet power was established in Armenia in 1920."  Kommersant)) officers led a very important section of the front in  the Armenian-Turkish war!>